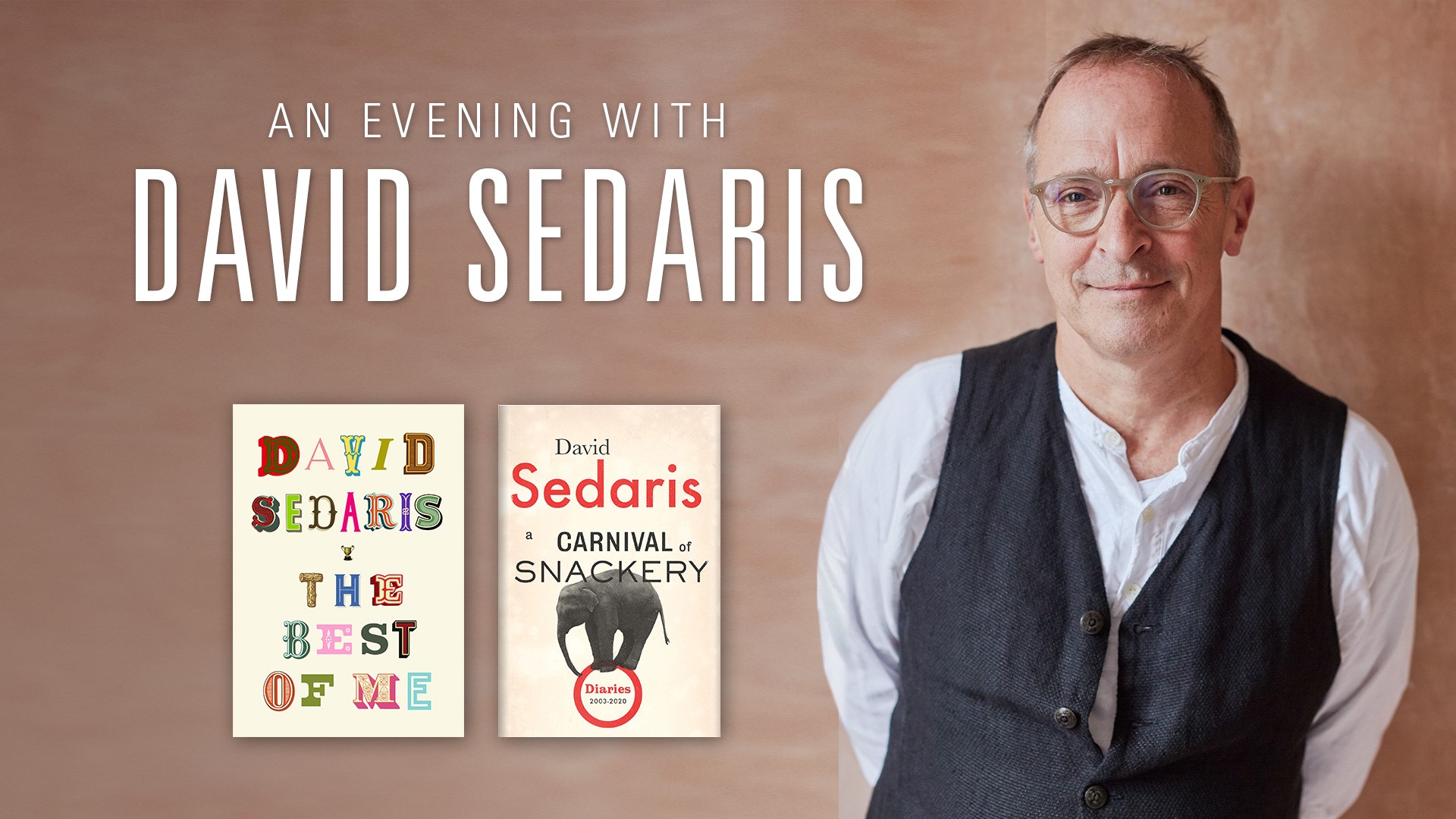 David returns to Seattle, after a two-year Covid pause, for his annual reading and signing at Benaroya Hall to celebrate the publication of A Carnival of Snackery:, Diaries 2003-2020. With sardonic wit and incisive social critiques, he will once again delight the audience with twists of humor and intelligence as he shares both published stories and works-in-progress. The San Francisco Chronicle says, “Sedaris belongs on any list of people writing in English at the moment who are revising our ideas about what’s funny.”

His most recent book, The Best of Me (Little Brown/Hachette, Fall 2020), is a collection of 42 previously published stories and essays, about which novelist Andrew Sean Greer wrote in the New York Times: “You must read The Best of Me, it will be a new experience, knowing that enough time has passed to find humor in the hardest part.”

Beloved for his personal essays and short stories, David Sedaris is the author of Barrel Fever, Holidays on Ice, Naked, Me Talk Pretty One Day, Dress Your Family in Corduroy and Denim, When You Are Engulfed in Flames, Let’s Explore Diabetes with Owls, and Calypso, which was a Washington Post Best Book of the Year. He is the author of Squirrel Seeks Chipmunk: A Modest Bestiary, a collection of fables with illustrations by Ian Falconer. He is also the author of an essay length ebook titled Themes and Variations. Each of these books was an immediate bestseller. He was also the editor of Children Playing Before a Statue of Hercules: An Anthology of Outstanding Stories. His pieces regularly appear in The New Yorker and have twice been included in “The Best American Essays.” The first volume of his diaries Theft By Finding: Diaries (1977-2002) was a New York Times best-selling book. As a companion piece to the book, Jeffrey Jenkins published and edited an art book of Sedaris’s diary covers, entitled David Sedaris Diaries: A Visual Compendium. He is currently working on the second volume of his diaries, A Carnival of Snackery, Diaries (2003-2020) (Little Brown/Hachette, October 5th 2021).

Sedaris and his sister, Amy Sedaris, have collaborated under the name “The Talent Family” and have written half-a-dozen plays which have been produced at La Mama, Lincoln Center, and The Drama Department in New York City. These plays include Stump the Host, Stitches, One Woman Shoe, which received an Obie Award, Incident at Cobbler’s Knob, and The Book of Liz, which was published in book form by Dramatists Play Service.

Sedaris has been nominated for five Grammy Awards for Best Spoken Word and Best Comedy Album. His audio recordings include “David Sedaris: Live for Your Listening Pleasure” and “David Sedaris Live at Carnegie Hall.” A feature film adaptation of his story C.O.G. was released after a premiere at the Sundance Film Festival (2013). Since 2011, he can be heard annually on a series of live recordings on BBC Radio 4 entitled “Meet David Sedaris.”  In 2019 David Sedaris became a regular contributor to CBS Sunday Morning, and his Masterclass, David Sedaris Teaches Storytelling and Humor, was released.