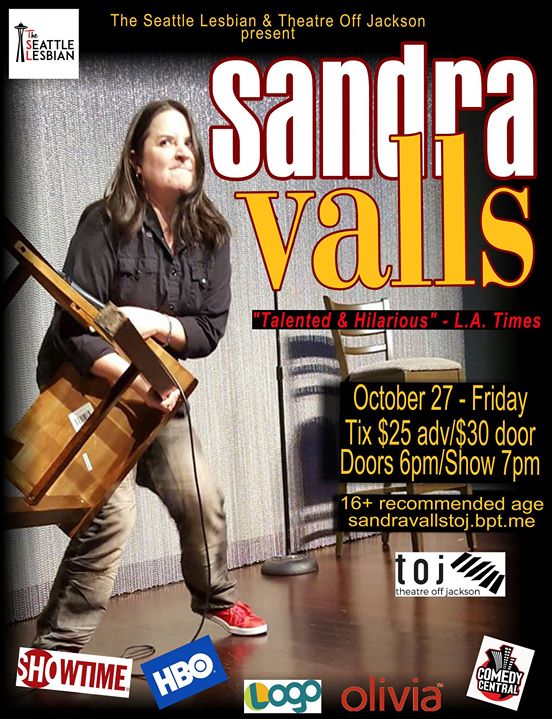 The Seattle Lesbian in association with Theatre Off Jackson present: (sponsored by Seattle Pride)

Sandra will make you laugh, dance, and even sing along with her! This is a night of fun, laughter, and music…yes music! Sandra sing y’all!

Recently added to Curve Magazine’s Pride Power List, Sandra is a nationally touring headlining comedian best known for her side-splitting comedy performances (and her zoot suit) on Showtime’s THE LATIN DIVAS OF COMEDY and PRIDE: GAY AND LESBIAN COMEDY SLAM. With her unique mix of physical comedy and brilliant story telling, it’s easy to see why the Los Angeles Times calls her “Talented and Hilarious”.

WHAT DO THEY SAY ABOUT HER?

• Curve Power List – Curve Magazine – One of the most influential queer women in the U.S.
• Top 100 Women We Love – Go Magazine
• Top 33 Bad Ass Comics with Latino Roots – Latina Magazine
• Top 10 Funniest Lesbians in the Country – Curve Magazine
• Talented and Hilarious – The Los Angeles Times • Comedic Gold! – Latina Magazine
• A Knock Out – My San Antonio
• Belly-clutching laughs – Shewired
• Freakin’ hilarious! –Womenfest Key West
• She brings to light issues that impact the women of color community! – QWOC Media
• Valls is as true to her ethnicity as she is to her sexuality; knocking tv audiences on their behinds! Curve Magazine