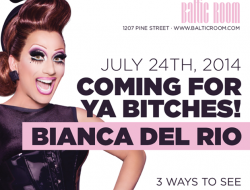 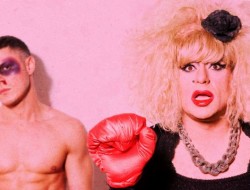 Ms Lauper Is Here Saturday; You Can Buy Tix To Her “Kinky Boots” Aug 1st There are people that are more excited about the Cyndi Lauper portion of the “Cher/Cyndi Lauper” Concert at Key Arena this Saturday, June 28, than the older star. After all, Cyndi ALSO has some VERY loyal fans. And, Cyndi has the added advantage that she’s suddenly “hot” again after scoring a Tony Award a year ago for her work on the hit Broadway musical KINKY BOOTS.

Cyndi won for scoring the show but Kinky Boots took home a total of SIX Tony Awards and quickly became the hot new musical for 2013. The show continues on Broadway but now the eagerly awaited national tour has hit the road and it was announced earlier this year that these “Boots” are walking into Seattle’s 5th Avenue Theatre for an October 7 -28, 2014 run at the iconic venue.

Season ticket sales are currently going on (click HERE to buy a package of 5th Avenue shows) but it was announced today that individual tickets will be going on sale on Friday, August 1st at 1o am. It’s a longish run for a tour but don’t wait too late to snag your desired seat…this is a hot show, especially for LGBTQ audiences due to the fact Kinky Boots is RAAAAAALLLLY gay. It’s about drag queens, shoes, and queer love and it was written by Ms Lauper (an icon to the community) and Harvey Fierstein, the King AND Queen of Broadway. There WILL be a lot of local Queens at this show on opening night!

More poo on Kinky Boots and the run at the 5th Avenue:

In Kinky Boots, Charlie Price has reluctantly inherited his father’s shoe factory, which is on the verge of bankruptcy. Trying to live up to his father’s legacy and save his family business, Charlie finds inspiration in the form of Lola. A fabulous entertainer in need of some sturdy stilettos, Lola turns out to be the one person who can help Charlie become the man he’s meant to be. As they work to turn the factory around, this unlikely pair finds that they have more in common than they ever dreamed possible… and discovers that when you change your mind about someone, you can change your whole world.

This is one of the most anticipated shows of the year…DO IT!