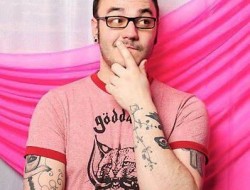 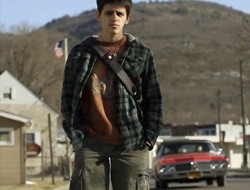 Guy Branum, when he’s not posing for publicity stills dressed like a gay detective on some awful CBS police procedural your Granma watches, will also pop into Seattle on Friday, June 20th for the “Out & In” FREE queer comedy showcase at The Neptune with a buttload of local queer comedians including our interviewer, Nick Sahoyah.

Stand up comedy is a thing that some people like and Guy Branum is a guy who does that thing. As it so happens, Guy is coming to town this week to headline Out & In: A Pride Comedy Showcase – a free show at the Neptune featuring Solomon Georgio and a lively roster of of humorous Northwest queers.

In anticipation of Out & In, I sat down with Guy in the middle of a pretty field for a picnic brunch/professional interview. Here’s what transpired:

Guy sips at his mimosa and leans in, eager to answer my queries.

NS: For the two or three people who haven’t seen you on Chelsea Lately, Totally Biased with W. Kumau Bell, Last Comic Standing, or this week’s episode of Put Your Hands Together, who the hell are you?

GB: I’m just a young, aspiring real estate agent looking for love and satisfaction in the big city. I am also the Lion of Judah, the root and descendant of David and the bright morning star. Mostly, I am a fat gay guy who tells jokes, sometimes on TV. If I can’t achieve Dorothy Parker level drollery, I’m at least trying for Mary McCarthy level anger, Gore Vidal level letchery, and Rita Rudner level poise.

NS: Did you know all along that you were going to be a funny person for a living or was there a time in your life when you thought you’d be a doctor, or a boat salesman, or something lame like that?

GB: I grew up on an almond farm in Northern California, so never really thought a job that wasn’t about creating food or shelter was a viable career option. There isn’t really a need for society wits when the only society around is mainly focused on not dying of starvation or exposure. Even when I was in college I was pretty much just focused on getting a job decent enough to mean I never had to fight a chicken for one of its fetuses.

I went to law school and was pretty certain I was going to be a nice, responsible lawyer until I had to spend three years hanging out with future lawyers. I realized the only way to make it as a lawyer is to be heartless and single-minded in pursuit of your client’s objectives, and that the only thing I could really be heartless and single-minded about was making fun of celebrities. Thus I entered the highly competitive world of open mic stand up comedy, and the rest was a parade of unmitigated success and happiness. I still have not paid off law school. NS: One of your first big time gigs was writing for G4. Is it safe to call you a video game/tech geek?

GB: I played a lot of video games growing up: mostly dorky text adventures and stuff. I gave up games in college because I thought they were distracting me from achieving my full potential. (It was only decades later that I realized, as a nerdy fat guy, playing video games while eating food that was delivered to my house really is the fullness of my potential.) My first writing job was for G4, so I figured I was allowed to start playing games again, which led to a nasty, nasty World of Warcraft addiction for most of 2005.

GB: Now I mostly just play extremely boring, complex strategy games. I’m not a geek for games or tech, I just use games and tech to indulge my other nerddoms. Have you heard of Europa Universalis IV?

NS: I have not. Please explain.

GB: It’s a ridiculously long, complex game where you manage a country through the renaissance and early modern period. You can play as Mecklenburg! You can trade slaves! It’s terrible. I also play first person shooters because nothing settles the blood like simulating killing.

(I nod and pretend I know what a Mecklenburg is. I’m pretty sure he’s buying it and thinks I’m smart.)

NS: You’re falling from a 75 story building. A masked vigilante swoops in to catch you, places you gently on the sidewalk, kisses you on the mouth and disappears into the night. Is it Spider-man or Batman?

GB: I like Spider-man. He’s a charming every-man, but his radioactive venom-infused blood gives him amazing physical powers that would be valuable when doing “it”. Batman is just a rich guy with a lot of toys. I don’t want someone who just bought his way into superherodom.

But the real answer is that I’d rather it were Northstar from Alpha Flight, because he’s actually gay and Canadian. Cheap thrills from a straight boy are one thing, but being pressed against the body of an actual homo who could marry me and give me free health care is truly terrifying.

NS: It’s the early afternoon and you’re in your home. You’re late for an appointment but as you get ready you take a moment to diva out and lip sync in the bathroom mirror. Who are you lip syncing to?

(Guy and I deftly reenact the Single Ladies dance in its entirety. We resume the interview.)

A small songbird flies over to us landing on Guy’s finger a la Snow White. The two harmonize together for a while and I watch intently.

NS: How do you feel about that song Lady Gaga wrote about you? Do you get residuals whenever G.U.Y. gets played on the radio?

GB: I had never heard of this song until you told me about it. I will be contacting my attorney to seek damages. However, I was glad to see that Andy Cohen is getting more work.

NS: Finally my dearest Guy, if you lived in Seattle and had no money but wanted to see an all queer stand up showcase on Friday June 20th at 8:00 PM which show would you make sure to attend?

GB: If I lived in Seattle and had no money, I would be better than going to a stand-up comedy show or anything billed as “all queer” and would instead to go an installation of post-gender yarn art produced by the inmates at a women’s minimum security prison being exhibited in an independent coffee shop/arts space. But if I were ME, I’d go to Out & In: A Pride Comedy Showcase. Because I am PROUD.

NS: That’s good, because you have to be there. We’re screwed without you.

Guy and I wrap up the remains of our brunch picnic and skip across the field into the sunset. Go to the show on Friday, it’s going to be fun. About the Author: Nick Sahoyah