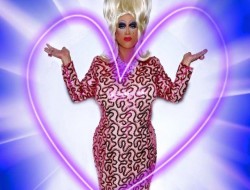 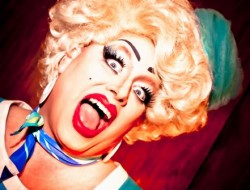 Come Fly Away With Your Air Hostess, Miss Sylvia... A handful of General Admission tickets remain for Saturday night’s big semi-annual Lifelong AIDS Alliance Gay Bingo Fundraiser over at Fremont Studios in Fremont. And, we do mean a handful….if you want to get in to one of the funnest fundraisers of the year, you can snatch a ticket online or try your luck at the door at 155 N. 35th St.

Fans of “Rocky Horror” will definitely want to Time Warp their way into the event; that’s the theme for tonight’s show which is hosted by those large and in charge ladies, Aleksa Manila and Mama Tits. The buzz is, there will be multiple performances and costume changes involving those two “ladies” and numbers from the iconic film and stage show…we even heard a rumor of some live singing.

Embark on a strange journey this January 31st. Join us for the rip-roaring Rocky Horror Gay Bingo extravaganza! With a plethora of prizes, drag performances and refreshments, this is an evening you won’t soon forget.

Dig out those campy corsets, glittering heels and party hats.

It’s time to shiver with antici…pation!

Hotpatootie and Bless our Souls, this sounds like a deliciously wicked good time!

(Also, look out for our photographer, Dom!)