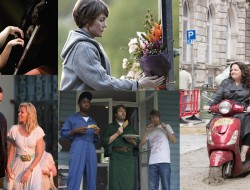 May 15, 2015 Comments Off on “Tab Hunter: Confidential” Gets Up Close With The Golden Boy Icon Who Came Out Views: 3831 Arts & Entertainment, Film

“Tab Hunter: Confidential” Gets Up Close With The Golden Boy Icon Who Came Out I hope that doesn’t come as a surprise to my mother.

She was excited when I told her that I would be asking Tab a few questions via email about his new biopic Tab Hunter: Confidential. Her enthusiasm reminded me how big of a star he was in the 1950s, and how far he fell from that height. His story is a fascinating part of gay history that deserves a cinematic recounting, and Confidential does the job cogently and capably.

Not a moment of confusion exists in the film. Not one wayward scene or extraneous moment spoils the parade of facts. You will learn about his career, and a bit about his personal life — not as much as you might want, especially given the word “confidential” in the film’s title. It sounds more risqué and revealing than it is, unless you didn’t already know that (spoilers!) Tony Perkins and Rock Hudson were gay.

Tab Hunter: Confidential is a nice, clean documentary. Perhaps too nice, and too clean. It largely avoids darker or more complex emotions, or deeper meditations on the toxic culture that created and then discarded Tab. In this way, it is not dissimilar from the 1950s-era studio marketing materials Tab once benefited from, all even-keeled and practical, served with a smile.

As I watched it, I found myself wanting it to go deeper into the extreme that was his life as a closeted gay teen idol who was marketed to girls everywhere. The film left me hungry for more detail about the worlds Tab worked in, worlds of gay history that are vanishing one eye-witness at a time. And who was doing whom? Tab stays classy and tight-lipped about information that might seem gossipy and trashy, but is really important history. Yesterday’s scandalous details are today’s crucial historical records. Visibility is presence is lineage.

It’s time we start reconstructing our gay history in all of its diverse richness. Without it, we are forever stuck in a shallow present. Tab is in an unique position to reveal much about our history, but Tab Hunter: Confidential remains biographical without providing much insight into the 1950s gay experience in the world around that biography. Though it is a worthwhile and entertaining documentary about a swell guy who was wronged by Hollywood, and while it certainly deserves your time, I can’t help but think that it could have been so much more.

I was fortunate enough to ask Tab some questions about his experiences and his new film, which is, by the way, screening at SIFF this year.

JB: Hi Tab. Thank you for taking the time to field some questions. You occupy a singular, important place in both film and gay history, and I am glad you revealed some of those histories by making “Confidential”.

As a gay viewer, I see much tribulation and injustice in your story, yet in “Confidential” you seem well-adjusted and at peace with everything that happened. I wonder if you might share more of your feelings about how the industry and media treated you, especially after your break with Warner. How big of a role do you think anti-gay bigotry played in your post-Warner career?

TH: While under contract to Warner Bros I was treated very well by the legitimate media. (Excluding the rags like Confidential) I was being sold as the “all American Boy” and my job to be that image. No press person would disparage me for fear of being banned by Warner Bros and ultimately be banned from interviewing other stars there at the time.

Once I left Warner I was fair game and the press did everything they could to destroy the image Warner Bros created. Not so much regarding my sexuality because that was still a very taboo subject.

I don’t think anti-gay bigotry played a big role in my post Warner’s career. As long as you didn’t officially “come out” you could continue to work.

I didn’t discuss my sexuality openly until 2005 when my book came out. Up until then I just didn’t think it was anybody’s business.

JB: Did you ever seek out gay or gay-friendly filmmakers before you were approached by John Waters? Could you say more about your relationship to the burgeoning independent cinema movement of the late 1960s and early 1970s? Was it a more homophobic scene than we might like to think today, or did your goals / aesthetics differ at that time?

TH: No I never sought out gay-friendly film makers. They may have sought me out but I just went where the work was. I worked in a lot of independent cinema in Italy in the 1960’s. That was a whole different world from the Hollywood studio movies I made in the 1950’s. The movies I made in the 60’s & 70’s were more or less cheap productions that I had to make the best of. You have to learn how to adjust. I was just happy to be working. The 1960’s & 70’s were just as homophobic as the 1950’s. It really wasn’t until the 1980’s things began to change (POLYESTER, LUST IN THE DUST)

JB: Could you expand on why you avoid watching your own films? Do you think any recollections resulting from the process of watching your work could have historical value, especially for gay people?

TH: I just don’t like watching my self on film, period. Some films I starred in I never saw until this documentary was in production. I saw footage of things I don’t even remember doing. Regarding historical value maybe the films I did with Divine will stand the test of time.

JB: Confidential gives us a good overview of your career and life, but I wonder if you would contextualize your story more by telling us about your perspective on, and experiences with, the New York and Los Angeles gay underground scenes of the 1950s and 1960s. Were you a part of them? Did you avoid them? What were their best and worst aspects?

TH: I avoided the whole gay scene. I would have been career suicide to walk into a gay bar then. My interest was not in the underground scene but with my horses. That’s where I spent 90% of my spare time.

JB: Please talk more about your decision to make “Confidential”. What convinced you to make this documentary now? How was the content decided upon? Could you give us any bonus “confidential” tidbits that didn’t make it into the film?

TH: Allan Glaser talked me into doing the documentary….he also talked me into writing my autobiography. I didn’t think anyone would care. Allan said I was wrong, people would care. When my book became a N.Y. Times Bestseller I figured Allan was right. Allan and director Jeffrey Schwarz decided the content. I just showed up and answered the questions they asked. Allan is a very good producer. Unfortunately you can’t put everything from my book into the movie.

Things that didn’t make the cut was my Broadway debut with Tahullah Bankhead, a brief affair I had with Rudolph Nureyev, my relationship with John Cohn (Harry Cohn’s widow).

JB: What are you hoping younger generations of gay viewers and artists might take away from your story? What might you say to young artists who are currently struggling with coming out?

TH: Don’t worry what other people think. March to your own drummer. Be true to yourself. JB: Did you ever speak with Divine about being a closeted / gay actor? Is there anything more you could tell us about your time working with him, and your perspective on his struggles in the 1980s versus yours in the 1960s-1970s? Was there anything you might have wanted to say to him about survival in the business but didn’t?

I loved working with Divine. The consummate professional. He gave it his all and did his best. Without his wig he was like a beached whale. With the wig sparks flew.

JB: How did your process differ between working with studio directors in the 1950s and working with John Waters?

JB: My mom had a crush on you, and she grew up homophobic as did many people in the 1950s and 1960s, though she is completely accepting now. If she were to meet you after watching “Confidential”, what might you say to her and other straight female fans of your 1950s work?

TH: Thank you for going to my movies. If it wasn’t for people like your mother I wouldn’t have been working.

JB: “Confidential” is an important historical record and a well-constructed, moving piece in its own right. Thank you for making yourself visible, and for taking the time to answer more questions!

Tab Hunter Confidential screens Friday, May 15th at 7pm and Saturday, May 16th at 11am at the Harvard Exit Cinema. Both Tab Hunter and producer Allan Glaser are scheduled to attend both screenings. Tickets HERE!