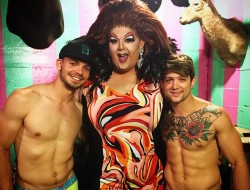 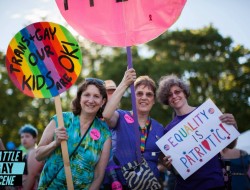 Now that gay puppets can wed in ALL 50 states, it’s a great day to be gay in America. Happy Pride ! Photo: Michael McAfoose/Urban Focus Photography for SGS

We’re going to keep this post short and sweet…’cause we got Pridey stuff to do!!!!

It’s the Big Day…Seattle’s LGBTQ Pride Day is happening NOW, Sunday, June 28, 2015 with the Pride Parade going on downtown along 4th Avenue from Union to Seattle Center with your very special hosts MAMA TITS and JACKIE BEAT at Westlake Plaza. It’s a LOOOOOOOONG ass parade/march so hopefully you’re well rested/nourished before you go!

From Noon on, there’s the bigger and better than ever Seattle PrideFest at the Seattle Center with three big stages of entertainment, booths, food, beer gardens and thousands of homos and allies splashing in the International Fountain.

For all your other Pride Day needs…go to our fabulous Seattle Gay Scene Pride Guide and Calendar. It’s still chock-full of great events all over the city.

Remember to stay safe! Drink lots of water! (It’s cloudy right now but it’s still hot and you need LOTS of water regardless if sun is out or not!)

Have a terrific LGBTQ Pride, Seattle!

June 28, 2015  10:00 am
Celebrate Seattle Pride KEXP-style in 2013! We’re joining forces with the legendary 5 Point Café for a day-long party in historic Tilikum Place park — right at the end of the annual Pride Parade route. The event features a soundtrack provided by KEXP DJs, a beer garden with full cash bar, and a pig roast! …More Information

June 28, 2015  1:00 pm
WILDROSE PRIDE 2015!!!! JUNE 26-28 3 days of Dj’s, Bands, Dancing, Drinking, and Eating! ADVANCE TICKETS ON SALE NOW – AVAILABLE AT WILDROSE Limited availability so get them while they last! Weekend Pass– $28 VIP Weekend Pass– $50 — Includes Weekend Pass plus a reserved seat under a tent for all 3 days. Weekend and …More Information

June 28, 2015  3:00 pm
Mo-Wave 2014 and Chop Suey present KILL THE KEG: Pride Edition! Early Sunday shows with $1 drafts on selected kegs until they blow! June 28: Ononos ONONOS began 5 years ago as a collaborative multi-media project by 3 friends who wanted a vehicle to explore their mutual interests in music, visual & conceptual art. During …More Information

June 28, 2015  4:00 pm
SUNDAY, JUNE 28 – PRIDE PARTY (No Cover) VJ ART RUIZ Art has been a PURR resident VJ for over 4 years. Playing on nights like PURR’s Anniversary Party, Halloween, New Year’s Eve, and Pride, his music video style keeps customers entertained. From current Top 40, to Old School, there will always be something on …More Information

June 28, 2015  5:00 pm
Join us for Capitol Hill’s Pride Lounge during Pride Week Your place to rejuvenate, hydrate, eat and lounge all Pride Weekend. Every hour we’ll have drag performances, music videos, DJ/VJ, dating game, trivia, dancing and more. For everyone visiting from out of the country we also have free wifi. >>>>>Friday 26th<<<<<< 5pm Pride Kick off …More Information

June 28, 2015  6:30 pm
Celebrate your #SeattlePride with our new GAYZER LASER LIGHT SHOW at Pacific Science Center! We’ve curated a special show of queer music and visuals for a unique pride weekend experience. Songs from queer films, from LGBT icons, and some local artists. It’s a trip from ballads of the past to dance favorites of today. Kick …More Information

June 28, 2015  7:00 pm
Tickets: https://www.ticketfly.com/purchase/event/818853 Chandelier Productions brings you a one night only performance of the fourth-wall smashing, Tony Award winning Broadway hit “Hedwig & the Angry Inch”. Hear the Internationally Ignored song stylist, along with her Angry Inch, sing about the Origin of Love and her Wig in a Box. She will be transmitting on the Midnight …More Information

June 28, 2015  7:30 pm
Comedian Georgia Ragsdale explores her Texas roots in a quirky, poignant childhood to coming-of-age theatrical memoir. Set in suburban Houston in the 1960’s and 1970’s, short slide shows using family photos prove she is not making this up as she travels through a world of unusual characters and events. Illuminated with to-the-point stories and movement …More Information

June 28, 2015  9:00 pm
Lavender Underground is proud to host Seattle Eagle Tavern’s Pride finale party on Sunday, 28th. Lance’s House is named so in honor of Lance Hughes, one of the men behind the founding of what has become Seattle Eagle Tavern. The event is a throwback and a return to The Eagle name’s legacy in Seattle and throughout …More Information