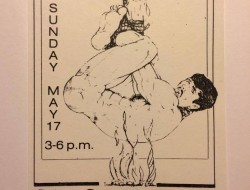 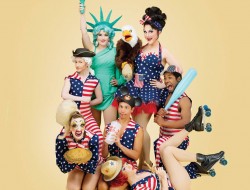 The Freedom Fantasia Gang Returns To The Triple Door...

Improv Star Kevin Kent of Teatro ZinZanni’s “The Return of Chaos”: The Interview Teatro ZinZanni is always an intimate experience and a fantastic evening of theater, song, acrobatics and dance, but the current show is made truly unique and hilarious by the talented Kevin Kent. He lives in the mountains of New Mexico but calls Seattle his home-away-from-home and was a cast member of the original Teatro ZinZanni show in Seattle in 1998. In the current show, The Return of Chaos, Kent plays Lula who is an evil Russian dog groomer extraordinaire and the twin sister of co-star Vita Radionova. His accent is on point and I personally covet his spectacular outfits put together and designed by Louise DiLenge. I chatted with Kent and got the scoop on his life and work.

Kate West: How did you get started with acting and writing?

Kevin Kent: In high school! I live on the property I grew up on, a homestead in the mountains outside of Santa Fe, New Mexico. So, for me, going to school and performing was just right. It allowed me to socialize and be away from home. Not that home was bad . . . it was just remote. I did speech and debate and drama, that sort of thing. And then I kept it up after high school.

KW: How long have you been pursuing performance as a career?

KK: Probably twenty years. I moved up here with a company that started in New Mexico and was improvisational. We all moved up together and had been performing and studying together. We would live in a one-bedroom walk-up in the summers in Chicago and do all of these crazy workshops and improv shows. We created an improvisational melange and then we all ended up performing with Dan Savage’s company way back when he was doing theater on a regular basis.

KW: How did you get involved with Teatro ZinZanni?

KK: Kind of by accident. I didn’t run away and join the circus–the circus came to me. Norm, who at the time was the head of Bumbershoot, went to the Barcelona Olympics and ended up producing something there and he saw a spiegeltent. He started doing research and decided he wanted to do something with one as part of the next phase in his life. At one point I was in a show with a woman who was a really good singer, Sandra Singler, and he really wanted her so he came to see the show we were in. And he said, “Oh! You should be doing this!” And they ended up getting Ann Wilson which was incredible.

KW: Were you involved in writing the new Teatro ZinZanni show The Return of Chaos?

KK: I was! To say that you write it sounds very different than it actually is because it’s fourteen little tiny transitions. So really what you do is come up with a running order and things are already completely fully developed. Since you know the people you kind of go, “Oh, can your act sort of be morphed into this and can you play this character?” And then you mix and match and direct those characters. KW: Do you get to be involved with picking out the costumes?

KK: I do and as one of the creators I get a lot of consultation in a way. Louise does all of the designs and is really good at listening to what you want and coming back with the concepts. My stuff I end up usually doing a lot of consultation because it is so specific to me. Normally my things aren’t very written so I have to pull it out of my head and make them understand and believe that it’s going to happen. For this particular show she came up with the concepts. I said I wanted to be twins with Vita, because of our similarities of course, and everyone went, “Right! Ok!” The really funny thing is that in the tent you can say things like that and people will go, “Oh yeah! Right! That sounds incredible! You can absolutely be identical twins with a 120-pound Ukrainian contortionist.

KW: Well you made it totally believable (sic).

KW: I couldn’t help but notice references to puppies, being collared, people in bondage and cages. Were the kinky references on purpose?

KK: Of course they’re on purpose! They have to be on purpose. We don’t all sit down and go, “Oh that would be interesting . . . this is my lifestyle.” But we all know each other pretty well. I said two things in the beginning stages of writing this show. The first thing was that the one man in the show who looks exactly like a super hero–I said I wanted him to play the big dork that got captured. And the second thing was that I wanted him to be in different forms of bondage all night long. Part of the interesting thing about circus and clow for me is that veil that you have of character and unreality is oddly thinner than you expect. The people that do the physical acts are very close to their bodies. Even though there’s spectacle and lights and flash and sequins, they end up being a very close reflection of who you are, whether it be your body or your clown.

KW: What or who inspires you?

KK: I teach for a company out of Los Angeles in Santa Cruz during the summer with a creative improvisation company for kids. I always tell them that whatever goes into you is inspiration–all the experiences during the day, all the people and idiosyncrasies and weird quirks. So it’s inspirational on a daily basis to see how people react to situations, each other and how people react to you. In terms of comedy there are standards like Carol Burnett and Lucille Ball and a woman I perform with sometimes called Christine Deaver. I perform with her sometimes in the show and we switch genders. We end up getting married in the show and she has a big cod piece and I have breasts and we both have mustaches. She and I love Carol Burnett and at the end of the night when people come up to us and say, “Oh my God! You’re just like Carol Burnett and Harvey Korman!” we take that as a compliment. People who literally took something, whether it be a sitcom or early TV, and made it their own inspires me. People who take nothing and make something their own.

KW: Does it excite you more to do improv or to already have something scripted?

KK: It is different. The challenge for me is going back and forth between scripted and improv. I think it’s why I’ve enjoyed doing this for so long. It’s not that I don’t enjoy doing other things, but I just love this. Sometimes you have control over it and sometimes not so much control over it. When I started I had a guy heckling me–this big Italian, hairy-chested, Daddy of a guy. He was hysterical and instead of shutting him down I went over and made him dance with me and opened his shirt and it worked beautifully. It was amazing and electrified the room. So I set up the situation and let people react and it has become show after show of discovering the moments to make people react. I have played Diana Goddess of the Hunt and gotten totally straight guys to kiss me, sometimes very passionately, right on the lips without me even moving towards them.

KK: Years and years ago I did a show that was a loving tribute to Sister Wendy Beckett. Dan Savage produced it and on the poster he asked people to bring in their own art. The first night people brought 2 pieces of art and I talked about them, the second night 5 pieces, and within two weeks I had to hire another person to stand at the door and curate the art because people were bringing 30 to 40 pieces per night. The people in the audience new absolutely that I was seeing the pieces for the first time. So about two years ago I had a few friends from LA up and we were at a store and were looking through a box of old photos. And they were so sad and old and beautiful and mysterious. We were looking at these family photos from the 1930s or 1940s that speak volumes and I got it in my head to put that on stage, to say to people to pick a photo out of a box and we would build that character. And then I got the idea that it would be a wake and we would celebrate people’s lives . . . and then I thought why not have people bring in their own photos and I could weave together several of them. So that’s my item on the bucket list, a new one-man show called Eulogy. It’s something that I’m working on putting together, a fun evening of improvisation.

If you’d like to see Kevin Kent play the evil Lula in all her glory, The Return of Chaos plays at Teatro ZinZanni, 222 Mercer Street in Seattle from June 11 – September 13, 2015. Tickets start at $99 for a show and 5-course dinner.