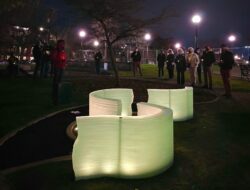 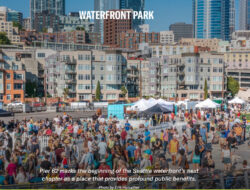 NOW Is The Time To Enjoy Seattle’s New Pier...

Prepare the smelling salts because fans of Seattle’s beloved vaudeville/variety show/circus dinner theater TEATRO ZINZANNI are gonna swoon when they hear the news that they’re making a return to Seattle after being away for the last three years.

ZinZanni announced on Tuesday they will return, for a limited engagement, at SoDo Park from November 16, 2022 through February 19, 2023.

This marks the first shows in Seattle since 2020 when the Covid-19 pandemic caused them to shut their doors. Prior to that, Zinzanni had had a longtime home in Seattle’s Uptown neighborhood but the land they leased as the homebase for their beloved Spiegeltent was sold and redeveloped as a multi-story apartment complex.

Casting for the new show will be announced in August.

From downtown, to lower Queen Anne, to Redmond, and most recently Woodinville – Teatro ZinZanni calls the Pacific Northwest home. “We are so happy to be coming home after almost three years away,” Artistic Director Norm Langill said. “What started here in 1998 has run continuously for years, so one can imagine that experiencing the impacts of the 2020 shutdown was devastating for our team, all the artists and partners involved, and of course our colleagues in the arts. We are deeply grateful for the countless requests to come back that we have received over the past few challenging years. Our team has worked tirelessly to make this possible through uncertain times, and we cannot wait to share all we’re planning.” While the special holiday engagement taking place at SODO Park is temporary, the organization is actively seeking a permanent home in the Pacific Northwest, prioritizing its Seattle revitalization and working to find that perfect spot.

For now, Teatro ZinZanni audiences can look forward to once again experiencing the incredible performance inside the zany world of ZinZanni, perfectly paired with a delicious multi-course feast. “We are producing this show ourselves and we know from experience that great food is integral to what we do. We are delighted to work with Herban Feast for this engagement.”

CEO of Herban Feast, BJ Duft said, “In 2018, Herban Feast celebrated a decade of hosting a variety of events in our iconic and historic SODO Park venue! Fast-forward to 2022, we are thrilled to be partnering with the renowned and awe-inspiring Teatro Zinzanni as they showcase live dinner performances in the idyllic setting of SODO Park. The combination of Teatro Zinzanni, SODO Park, and Herban Feast’s deliciously inspired whimsical food and beverages for plate and glass is sure to be an evening that everyone will enjoy!”

Teatro ZinZanni will announce complete casting this August. An exclusive ticket presale will be available ahead of the general public for past tickets buyers and email subscribers, and tickets will go on sale to the general public on August 30, 2022. Learn more at zinzanni.com/seattle.