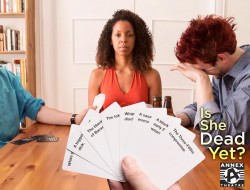 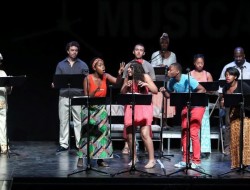 New Musicals Are Busting Out All Over-Village Theatre... Taproot Theatre is presenting a “refreshed” version of the now-classic musical, Godspell, by Stephen Schwartz (composer) and John-Michael Tebelak (book writer and original conceptualizer of the project). This will either really appeal to Godspell lovers or it won’t. Director Karen Lund has concentrated on relocating the musical to Pike Place Market, filling it with busker-types and infusing dozens, if not hundreds of topical and up to date references.

While the updated references are funny, often, and some audience members howled in laughter, this production is over-run with them. It has the effect of making the usually upbeat script way over the top in “funny.” There is a huge spiritual component, here, that even non-Christians may have learned to love, with absolutely gorgeous music (ok, I’m one of the non-Christians who love the music, obvs.).

Music director Edd Key also allowed for (or made) changes to the typical presentation of a number of the songs, with fewer high notes and more minor chording. This clearly wasn’t because the cast members couldn’t manage the songs: some of them are regular performers in other musical theater venues and each individually is an excellent cast member. So, there was a bit of a “flattening” effect for the music. It doesn’t soar the way it usually can.

The pacing is lightening speed, and transitions to some of the more meaningful songs is given short shrift so, suddenly, a spiritually freighted song jumps up to sing, with less of the preparation a more tender production might give it. The over effect is much less spiritual. Perhaps that would relieve someone who has never seen the musical because he or she was afraid it was “too religious.” This version won’t push you in that direction very far.

The climactic scene of Jesus’ death is then grafted onto this comedy-fest and it’s hard to connect with emotionally. Part of that is the lack of connection to Jesus as played by Mike Spee. Spee is one of my favorite musical theater performers (as are many in this cast) and a terrific performer. Somehow, however, his charisma in this particular role is lacking in power. That may be somewhat the effect of directing, the frenetic pacing, and the sheer amount of jokes. Spee is not really given time to connect with each cast member, though they all do their dangdest to make it look that way.

In fact, even talents like Katherine Jett, Tyler Todd Kimmel, Jessi Little, Sara Porkalob, Simon Pringle, Bethanie Russell, Asha Stichter, Daniel Stoltenberg and Ryan Childers, while individually fine singers and performers, instead of adding up to a sum greater, that mass just doesn’t happen. They may all be having a great time, and try to occasionally involve/interact with the audience, the energy doesn’t reach very far off the stage. At least, that is how it felt to me. As I said, there were clearly audience members who love, love, loved it. I just can’t tell which one of those you would be. For me, the tone and the delivery were confusing and non-engaging in odd ways, so I felt disappointed, though I enjoyed a lot of the performances.

Cast members also showed off other talents like violin-playing (Spee and Jett) and piano- and guitar- and banjo-playing. A segment of imitations of Muppet characters was particularly well-done.