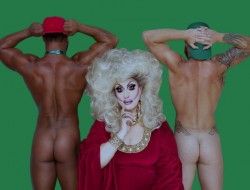 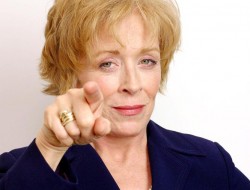 Another Fun Weekend Ahead for Women!

So Many Holiday Shows…So. Very. Many…..Dina, Ham, Bacon and Homo All Love The Holidays! Sister Mary Agnes aka comedic genius Lisa Koch returns for “Ham for the Holidays: Who’s Afraid of Virginia Ham?” at ACT this month.

Every mothertrucker and his mother has a damn holiday show now.

Everyone finally realized how Dina Martina bought her house…by raking in the bucks with a lucrative holiday show running over the ENTIRE holiday season. (Well, that and her father invented ointment. Not many people know this, but Dina is the Preparation H heiress…)

Now, every queen, burlesque star and two bit hookah has a holiday themed show of some kind.

That being ranted, let’s look at some of the many offerings, most of them being performed by our friends and neighbors in the homocentric arty farty community.

Of course, there’s the aforementioned ointment queen, Miss Dina Martina with her annual cash grab/Xmas themed cabaret show now in its 43rd year at Re-bar Place (aka, the “club that stays open thanks to the money Dina brings in every year…”)

Fun Fact: If you wanna punk an owner of Re-bar, call them up and pretend to be Dina and tell them “I’m sorry, but I’m moving my shows to Seattle Rep this year…” and then wait to hear them hit the floor after they collapse in horror!

Dina’s Xmas Travesty opened the day after Thanksgiving and her show runs through New Year’s Eve with shows pretty much scheduled around the clock. Once again, she’s being accompanied by her favorite pianist, Mr. Chris Jeffries and you can expect the usual array of “jift” giving, song parodies and brilliantly long winded stories. Once again, please don’t get too drunk and think you can out wit Miss Martina…or, maybe you should! We do so enjoy watching her rip drunk assholes to pieces!

But, hurry…Dina has already sold out of several performances! Best to grab your desired night while you can! Tickets are HERE!!

Two more beloved shows open THIS week. Our favorite funny ladies, Ms Lisa Koch and Ms Peggy Platt aka “Dos Fallopia” return to ACT’s Falls Theatre for the 48th consecutive year with their delightfully ribald HAM FOR THE HOLIDAYS variety show. This year’s edition is subtitled “Who’s Afraid of Virginia Ham?” and you can expect the usual round of hilarious sketches that very intentionally honor comedy traditions set by “The Carol Burnett Show” and “SCTV”.

It’s a hilarious must see holiday show with BRAND NEW material every year performed by Lisa and Peggy, two of the funniest women in the history of the world. It BEHOOVES you to go see this year’s edition which opens this Thursday, December 3rd and runs through December 20, 2015. Another traditional holiday show is growing. In the past, Sylvia O’Stayformore’s BACON STRIP would do a single show for their holiday edition, which features the usual round of sordid drag perversion you’ve come to expect from a Bacon Strip performance. If you’re a tee-totaling, Bible humper or a politically correct, fragile flower type, you’re probably NOT going to enjoy their naughty antics….which is fine, because the rest of us who DO enjoy non-pc filth don’t really want you there!

Soooooo, Miss Sylvia woke up and smelled the bacon this year and decided that her Bacon Strip needs to expand their playing field so for 2015, you have FOUR opportunities to see BACON STRIP: SPECIAL CHRISTMAS GIFTS either THIS Saturday, December 5th AND/OR the following Saturday, December 12th AND/OR the following weekend when it will be performed on FRIDAY, December 18th and SATURDAY, December 19th. ALL shows are performed at 9pm at the Theatre Off Jackson in the International District and snatch your tickets HERE! FINALLY, and not opening until NEXT week, the newest member of the “Homosexual Depraved Holiday Shows Quadrifecta”, DeLouRue’s now beloved HOMO FOR THE HOLIDAYS, starring its producer/creators BenDeLaCreme, Lou Henry Hoover and Kitten LaRue plus other beloved drag/burlyq icons like Waxie Moon and Cherdonna! Once again, it’s at Oddfellows Building’s West Hall on Capitol Hill and once again they have a VERY packed scheduled starting Thursday, December 10th and running through Sunday, December 27th.

It’s a colorfully crazy show that doesn’t vary much from year to year (it’s built on the Burlesque show model of “once you have a show/act, why change it?”) but it’s such a delight that many folks go every year to experience all these GORGEOUS and ridiculously talented people be…GORGEOUS and RIDICULOUSLY TALENTED!! It’s apparently so popular, they can afford BUS ADS!!! Do you know how much those COST???!?!?!?

Hopefully, y’all have LOTS of money to spend on seeing shows! These are the Queer Big 4, but there’s also Jinkx Monsoon and Major Scales’ show at Seattle Repertory Theatre, plus the Buttcracker Suite at the Erickson, plus “Land of the Sweets” at The Triple Door and tons of one off events like JACKIE BEAT: WHITE MEAT, OR DARK, coming to The Unicorn in a couple weeks.

Better go rob a liquor store to afford all these shows!