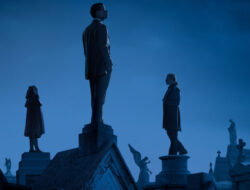 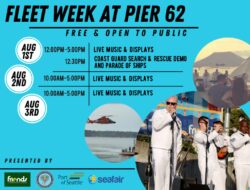 It’s Fleet Week In Seattle…Check Out Events At Pier...

This week, the many fans, friends, and peers of Seattle theater artist Nick Garrison have been paying tribute to the actor who unexpectedly passed away on Tuesday, July 26th hiking on Burke-Gilman Trail near his home. He was only 47 years old.

Most of the reactions follow a similar pattern of expressing shock, horror, grief at the tragic loss of a performer beloved by so many people in Seattle and beyond. Many of the words written on social media, are loving tributes but also with many of them relaying hilarious memories shared with Nick either in person or with seeing him in performance.

Onstage and off, Nick was a loving force of nature with a wicked sense of humor and a razor sharp intellect. He displayed these gifts in every successful role he played on a stage whether it was in a huge theater space like the 5th Avenue Theatre or on the tiny, grubby stage at beloved local cabaret space Re-bar or even further afield in Chicago, San Francisco or the UK where he also won the hearts of anyone lucky enough to see him perform.

And, many of these hearts were gay ones….LGBTQ fans were all well aware that Nick was unabashedly queer; a proud gay man very much in touch with the entire range of gender expression. He not only played many of the great LGBTQ roles in the theater but he frequently played female roles with great wit and style. Probably best known for his award winning role as Hedwig in John Cameron Mitchell and Stephen Trask’s much beloved queer rock musical “Hedwig & the Angry Inch”, it’s without a doubt a role that Nick was meant to play.

Hedwig, a non-binary, East German gay man in love with American pop music/culture is talked into getting a sex change operation by his American G.I. lover and escapes to the United States right before the Berlin Wall falls. Hedwig’s sex change operation was botched leaving them with a stub of a penis aka “the angry inch”. The lover leaves Hedwig in a mobile home in Junction City, Kansas where Hedwig takes up with a local high school boy and mentors him in the ways of love and in the ways of rock n roll. The boy leaves Hedwig and becomes a rock star named Tommy Gnosis (named by Hedwig) and an embittered Hedwig shadows Tommy on his world tour by appearing in shady local night clubs near the huge venues where Tommy is a Rock God singing songs that Hedwig wrote. The musical is centered on Hedwig in that seedy club, relaying their life through story and song with a live band and Hedwig’s put upon and bullied sidekick Yitzhak, who is also queer and non-binary.

In 2000, Seattle was one of the first cities authorized to perform Hedwig & the Angry Inch after it became a huge hit in New York in its original production with John Cameron Mitchell. Nick was cast as Hedwig and gave a tour de force performance….it called upon him to channel Hedwig’s tough brand of feminine machismo that ranged from the tender to the quite cruel. The show itself is comedic yet quite tragic. The songs ranged from wistful love ballads to taunting declarations of fury and anger. “Hedwig” touched an LGBTQ+ audience who related to all the dichotomies inherent in the piece…all the colors in its rainbow. All its pain and its ecstasy.

That original production of “Hedwig” ran for months at Re-bar. Audiences couldn’t get enough of Nick and Hedwig and those songs. Nick’s reviews were so strong that he was asked to anchor productions in San Francisco and Chicago and in the U.K. for a tour. Eventually, he came back to reprise the role for a second time in Re-bar for another long run at Re-bar.

And, Re-bar was one of Nick’s many artistic homes. A grungy art bar at the base of Capitol Hill in the Denny Triangle, it became a legendary incubator for queer local talent during the 1990s up to 2020 when the Age of Covid finally closed it. At Re-bar, Nick not only created his own take on Hedwig but performed in many other shows most spectacularly in Ian Bell’s Brown Derby series of spoofs of famous Hollywood movies. There, Nick shone in a huge variety of mostly female roles, from the mousy to the profane with his take on Sharon Stone in Basic Instinct being a particular favorite.

But, in the late 90s through the early 2010s, Nick had homes all over the city, starring in beloved shows at the long gone Empty Space including the very successful shows Vera Wilde and Valley of the Dolls. He headlined as the Emcee in a very red production of Cabaret at the 5th Avenue Theater which subsequently went on a national tour then later delighted family audiences as one of the wicked stepsisters in Cinderella where he partnered with long time fellow collaborator Sarah Rudinoff who had played Yitzhak in the original Re-bar production of “Hedwig”.

He even had a local cinematic home starring in the campy gay horror film Creatures From the Pink Lagoon in 2006 directed by Chris Diani and featuring a bevy of local talent.

Nick also had an artistic home at the Seattle Rep where he was cast in a female role in Joe Orton’s Loot and subsequently became a protege of artistic director Jerry Manning who directed Nick in a well received production of I Am My Own Wife another theater work about a gender variant East German. Manning’s death in 2014 was a blow to Nick who dealt with health issues in the mid 2010s and eventually stopped performing. For several years, Nick was off the radar with friends and fans worried about his well-being.

In the late 2010s, Nick eventually emerged from his self exhile and began interacting with the world again via erudite and frequently hilarious posts on Facebook. The last time I saw Nick, was in early 2020 right before Covid-19 hit, at the John Cameron Mitchell show at The Moore Theatre. In one of those weird coincidences in life things, I was seated next to Sarah Rudinoff and Nick Garrison was sitting immediatley behind us. The two hadn’t seen each other in a long while and I got to witness a rather sweet reunion between the two of them. Later that same night, both of them went backstage to meet with John Cameron Mitchell himself, the first time they had….astonishingly…all met. It was a special night for many reasons

Nick also seemed poised to return to the stage. Covid managed to foul up some of those plans and in the last year, Nick was busy taking care of his mother during a health crisis; he turned down some opportunities to focus on her. But, the future looked promising for Nick as he began talking about ideas and projects he’d like to do. It seemed like he was edging closer to returning to live performance.

We’ve lost that opportunity. And, it’s hard. And, especially hard for Nick’s large and loving family. Our hearts go out to them for losing a son, a brother, a nephew who passionately loved his family.

And, then there’s us…the friends and the fans. I think Nick was also passionate about them/us, too.

It’s hard to lose someone we all love.

Songs frequently say it best and Mitchell and Trask wrote some beautiful songs for Hedwig & the Angry Inch and arguably the most beautiful one is the “Origin of Love” which might be the best way to express how we feel.

A toast to Mr. Garrison.