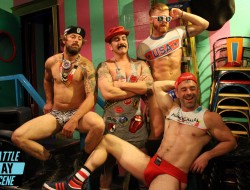 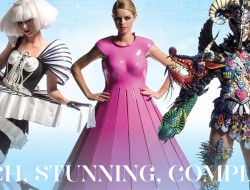 Kitten ‘n’ Lou Get “Camptacular” At The Triple Door Apparently, Seattle’s adorable sweethearts (onstage and off) Kitten ‘n’ Lou are now part of our 4th of July tradition since the winsome duo are in town every Independence Day Weekend for a patriotic show at The Triple Door. In previous years they’ve been 2/3 of “Freedom Fantasia” their joint production with co-partner BenDeLaCreme, a campy pageant of all things Americana. The trio have retired “Freedom” for awhile (gotta keep things fresh and interesting!!!) and apparently BenDeLa is busy off “RuPauling” it around the country (though we just saw her walkin’ down the street yesterday) and Kitten ‘n’ Lou have whipped up a new show for Fireworks Fun Weekend.

More about this “Camp”:

It’s CAMPTACULAR their “wettest, hottest, American-est summer show ever”. This “brilliantly deranged” spectacle (TimeOut NY) takes you to the campiest of summer camps, featuring an all-star cast of Seattle dance, drag, and burlesque icons. In the hilarious tradition of classic and awesomely awful American summer camp movies — think Meatballs — Camptacular! takes you on a surreal and nostalgic trip to the great outdoors, where campers roast their weenies by the fire, tell bizarre ghost stories, frolic in sleeping bags, fall in love in the moonlight and sneak into the woods … all culminating in the most epic camp “talent show” Seattle has ever seen.

Featuring a bombastic and diverse cast of internationally celebrated theater, drag, cabaret, burlesque, and contemporary dance tastemakers, CAMPTACULAR is the ultimate stand-up-and-salute extravaganza to escape reality and usher in the summer with a bang!