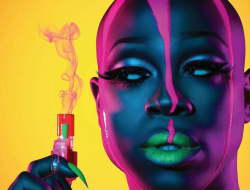 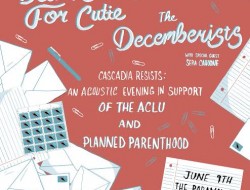 Death Cab For Cutie and The Decemberists Team Up...

May 8, 2017 Comments Off on Dita Von Teese Heads Back To Seattle For “The Art of the Teese” Views: 2213 *Seattle Theaterland, Arts & Entertainment, Burlesque Popular but also controversial Burlesque superstar DITA VON TEESE has just announced the west coast leg of her international tour of her show “The Art of the Teese” which will kick off July 6th in San Diego and hits Seattle’s Moore Theatre on July 23rd. This new show will include brand new material never before performed in the United States as well as a brand new version of her “Martini Glass” piece which features a cocktail glass big enough to satisfy the biggest drunks on Capitol Hill…

You know who you are…

And, I say controversial because Ms Von Teese got into some hot water locally the last time she was in Seattle in 2016 when some local Seattle burlesque performers criticized Von Teese for a piece that incorporated Chinese imagery/iconography/history. Some thought it disrespectful of Asian culture and Dita Von Teese guilty of cultural appropriation. This new show coming to Seattle does not include that number.

More information on this tour including dates to buy tickets.

International Queen of Burlesque, Dita Von Teese, is set to bring audiences an opulent evening of glamour and seduction in her critically acclaimed, “The Art of the Teese” which kicks off July 6th in San Diego, CA.

“I’m proud to bring together a show-stopping, diverse cast of the crème de la crème of modern burlesque stars that elate and inspire! The Art of the Teese is an opulent and riotous spectacle that is not to be missed!”

The decadent spectacle treats audiences to four of Von Teese’s most exhilarating performances, including a brand new version of her iconic “Martini Glass” routine which features a beautiful new champagne glass, crystalized from top to bottom with over 250,000 Swarovski crystals.  She will also be debuting a brand new costume for the routine featuring her recently added male dancers. Each show throughout the tour will showcase the stunning visuals of the exclusive acts that have made Von Teese the consummate performer in modern Burlesque, captivating the imagination and transporting audiences worldwide.

This leg of the tour brings new acts never before seen in the United States including “Lazy,” an act only ever performed at The Crazy Horse Paris (including new costuming from British designer, Jenny Packham), an all-new ballet-themed act “Swan Lake Stripteese,” plus a revitalization of her show-stopping Cowgirl Act with her sexy male “Vontourage.”

The “Burlesque Superheroine” (Vanity Fair) will be joined on stage by an eclectic supporting cast of today’s brightest stars of Burlesque.

The Los Angeles Times says, “Her attention to detail and embellished glitz onstage is unparalleled, even for pop stars. From the sparkle of each and every Swarovski crystal (hundreds of thousands swathe pretty much every prop and article of clothing in the production) to the sensual lighting that caresses her slender porcelain frame to the vampy music that sets the mood for the procession of themed vignettes – your eye cannot turn away from the utter flawlessness of it all.”

“Dita is absolutely mesmerizing. She elevates the art of tease with an effortless grace and ease that is thoroughly intoxicating, and the elegance and beauty of her movements will truly take your breath away! It is delicious, powerful and playfully provocative!”
– Demi Moore –

“Dita is the true definition of glamour.”
– RuPaul –

“Dita exudes timeless grace. She is our generation’s Bettie Page, but on a much different level. She was born to entertain. Love that girl!”
– Aaron Paul –

“Dita’s show is timeless, with a powerful delivery that explores the sensuality of the human spirit. With jaw dropping costumes, a thunderous crescendo of music and superb production design, Dita brings burlesque to a whole new level. The show is dazzling and sexy…a must see!!”
– Debi Mazar –

Be sure to check out the special VIP packages which include a post-show meet-and-greet and photo with the one and only Dita Von Teese herself!