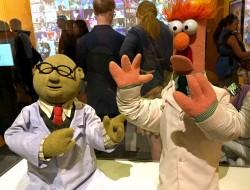 Attention Nerds! MoPOP is EVERYTHING With Muppets RIGHT NOW... 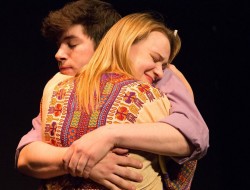 Previews began last week and the official opening is Thursday, June 15th but STEPHANIE RENEE WALL who is creating the role of ‘Michele’ in the brand new musicalized version of the cult comedy film, Romy and Michele’s High School Reunion, had time to answer 8 questions for our own David-Edward Hughes.

David-Edward Hughes: Were you familiar with the film Romy and Michele’s High School Reunion before you knew you were up for the show?

Stephanie Renee Wall: Yes, very! I’ve always thought the movie was hilarious, and so when Kristin called me a few years ago to come read for Michele, I was ecstatic.

Did you read for both roles or just Michele?

Only Michele! It was Kismet!

I have never seen the film, so for me and others what is your summary of the plot?

Romy and Michele have been best friends since they were mutually bullied in High School… so when their 10 year reunion comes up, they want to show their peers how amazing their lives have become. Romy feels inadequate, so she and Michele set out on a mission to “upgrade” their lives, eventually resorting to a GINORMOUS lie about inventing Post-Its. All kinds of shenanigans ensue, and eventually the girls learn that being themselves is way cuter than anything they could’ve possibly made up.

Are you more alike or different than your character?

Did you know your co-star before the casting at all?

Are you two adapting easily to playing life-long friends?

1000%! She’s amazing and hilarious and I’m COMPLETELY obsessed with her.

What is the score like? Why do you think it needed to be musicalized?

Romy and Michele is to Legally Blonde as Pink is to Britney Spears. We’re musical theatre pop, but with a more current, rock n roll edge. The very intense positive and negative emotions that come with being in love, rejected, bullied, and finally embraced and celebrated beg for music. It’s perfect.

In the canon of musicals name a role or two you are dying to play one day.

I am dying to play Sally Bowles in Cabaret, Louise in Gypsy (again), Fantine in Les Miserables, and Queenie in Andrew Lippa’s Wild Party. This summer, two of the quirkiest and most endearing best friends in pop culture will make their musical theater debut at The 5th Avenue Theatre in the World Premiere production of Romy and Michele’s High School Reunion. Based on the 1997 cult hit film, Romy and Michele will star Cortney Wolfson, who previously starred in Kinky Boots on Broadway, as Romy and Stephanie Renee Wall, who starred as Elsa in Disney’s Frozen Live, as Michele alongside a sensational cast of locally and nationally acclaimed actors. The 5th’s production features a creative team including Rock of Ages’ Director Kristin Hanggi and a book by the film’s screenwriter Robin Schiff.

Romy and Michele are two inseparable best friends whose relationship is put to the test when they invent fake careers to impress people at their 10-year high school reunion. This production, which is the 18th new musical to be produced by The 5th Avenue Theatre, features an all new ‘80s and ‘90s pop/rock-inspired score from Gwendolyn Sanford and Brandon Jay, composers of Orange is the New Black. It’s the coolest thing since the invention of Post-its.