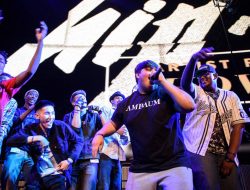 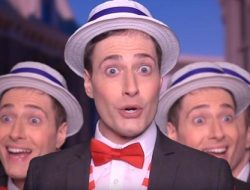 August 16, 2017 Comments Off on Who Doesn’t Love A Little “Seattle Gossip”? Views: 1493 *Seattle Musicland, Music, Music You Should Know Seattle has a new super group! WHO IS SHE? release debut album “Seattle Gossip” on October 6, 2017

We love new bands! Especially ones that are “special project” bands created by members of DIFFERENT bands to form a whole new entity.

Here, musicians from Chastity Belt, “Lisa Prank” and Tacocat unite to create WHO IS SHE? who will release their debut album “Seattle Gossip” on October 6th via Father/Daughter Records. Their first single “Top 8” is out now…go check it out.

You have to j’adore any band with song titles like, “I’m Getting Courteney Cox and David Arquette Back Together If It’s the Last Thing I Do:” and “Jordan Catalano” the name of actor Jared Leto’s character on My So-Called Life.

Seattle musicians Julia Shapiro (Chastity Belt, Childbirth), Robin Edwards (Lisa Prank) and Bree McKenna (Tacocat, Childbirth) have formed a new band called Who Is She? The trio will release their debut offering entitled Seattle Gossip on October 6th via Father/Daughter Records (Vagabon, Forth Wanderers, Diet Cig). Stereogum premiered the first single, “Top 8” saying it is a “great example of the economical yet effective songwriting that marks the current crop of Seattle talent, which often uses goofiness and likability as a way to get to the tender vulnerabilities at the heart of everyday life.”

Who Is She? is members of Tacocat, Chastity Belt, and Lisa Prank. Started as a friendship project writing songs based on the missed connection ads from Seattle newspaper The Stranger when Robin Edwards (Lisa Prank) and Bree McKenna (Tacocat) were living in bedrooms next door to each other at legendary Seattle punk house Spruce House, the two Seattle music celebs then enlisted another gal with a lot of free time on her hands, Julia Shapiro of Chastity Belt, to play the drums.

The songs then expanded from lonely ditties about admiring (but not talking to) strangers on the bus to other hard-hitting topics like the magical chemistry between Courteney Cox and David Arquette in the Scream franchise, 90s internet time traveler John Titor, fictional My So-Called Life dreamboat dud Jordan Catalano, and the brutal ranking system of friendship on Myspace. Inspired by Canadian cuddlecore sensation Cub and the silly inside joke holes you go down when you’re constantly hanging out with your pals, Who is She?’s Seattle Gossip is a star-studded, all-killer no filler addition to the booming Seattle music scene canon.