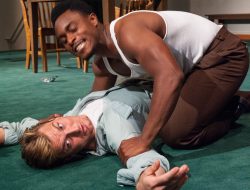 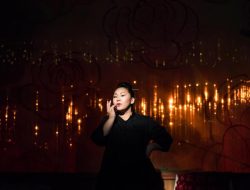 It was a big theater weekend in Seattle as the 2017 fall season began with 4 major productions opening this weekend including a huge community effort that also CLOSED this weekend…unfortunately.

It’s THE ODYSSEY,  very freely adapted from Homer by Todd Almond as a musical, modern interpretation of the classic tale of Odysseus, the King of Ithaca who’s desperately trying to return home after fighting in the Trojan War but beset by various calamities and godly interferences to the point it has kept him away from home for 20 years. Meanwhile, his loyal wife Penelope is desperately trying to keep horny suitors at bay who want her to declare Odysseus dead and then marry one of them thus making them the new king of Ithaca. Penelope has been pulling the wool over their eyes but she’s desperately running out of time.

This version of the cherished old tale is a very special production because it’s the first project of a brand new theater group…Seattle Repertory Theatre is taking the model of New York City’s Public Theatre and their “Public Works” program originally conceived by director Lear deBessonet that uses average “folks” and performance arts groups from a variety of different branches in combination with professional theater artists to create large scale works that involve the entire community. “Public Works Seattle” is inaugurating their take on the NYC program with The Odyssey, originally done in 2015 at the Delacorte Theatre and conceived and directed by Ms deBessonet. Here, the Seattle version is directed by veteran Seattle actress/theater maker Marya Sea Kaminski, the associate artistic director at Seattle Rep for the last few years and guided by Simone Hamilton, the newly hired manager of the program which will be a branch of the Rep.

The Seattle Odyssey mostly mimics the original NYC production with similar choices made in design, costuming and casting. Professional actors including Terence Arthur (as Odysseus), Alexandra Tavares (as Penelope) and Justin Huertas (The Singer/Narrator) lead the other 100 or so amateur actors and cameo performers that include the Seattle Seahawks’ Blue Thunder percussion group, the fabulous Purple Lemonade Collective of dancers and even our drag diva, Tipsy Rose Lee as the meddling sorceress Circe (who gave a very funny and audience endearing performance). It all sounds a bit messy and contrived but the result is actually charmingly clever and warmly enthusiastic. Yes, some of the performers are a tad wooden in their delivery, but it only adds to the charm of the piece. This production features young children, elders and even homeless people cast in the roles of townspeople and sailors and it really does feel like a production by and for the entire community.

It’s definitely a “best of” version of the Odyssey with a light hearted script that features the Gods sending messages by cell phone and clever sight gags involving local eateries like Dick’s Drive-In and Pagliacci Pizza but those clever innovations combined with a winning score and songs by Todd Almond and handsome costumes by Nephelie Andonyadis and a very winsome performance by Justin Huertas as the Singer who propels the story along, made for a very engaging evening.

Sadly, this Odyssey is already gone; it opened and closed this weekend but Public Works Seattle will continue with more productions in the future.