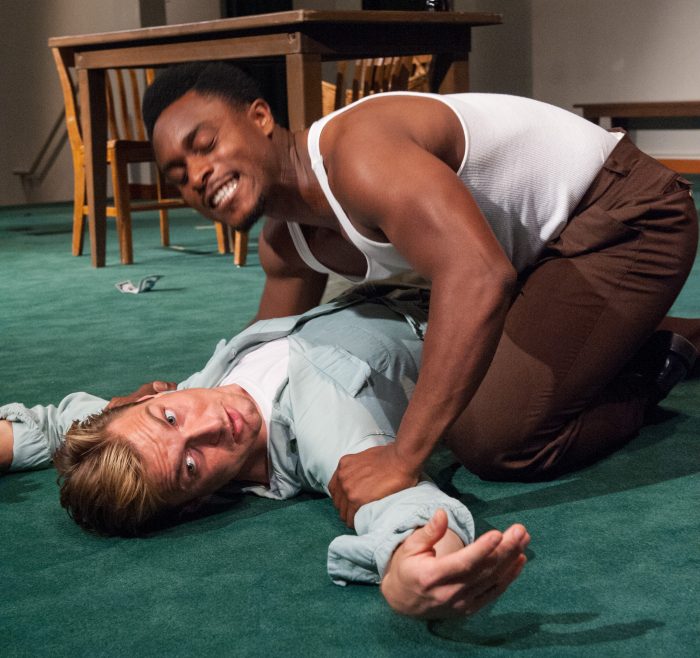 Ryan Williams French, top and Leicester Landon, bottom, are part of the ensemble of The Williams Project’s production of James Baldwin’s 1964 play, BLUES FOR MISTER CHARLIE

Summer 2017 has a fork in it now ’cause it’s DONE and it’s September which means the kidsare back in school and the stores are full of Halloween candy and local theaters are debuting 25 new productions or so this month including the return of the very interesting team at The Williams Project with a reprise of a play they’ve produced in the past: James Baldwin’s 1964 play BLUES FOR MISTER CHARLIE. Based on the 1955 murder of Emmett Till, a 14 year old black youth visiting family in Mississippi who was brutally lynched for allegedly speaking offensively to a white woman in a grocery store. The Till murder was one of the sparks leading to the Civil Rights Movement and Baldwin, best known as a novelist and essayist uses the basic framework of the actual event for this play.

Blues For Mister Charlie opens with the death of Richard Henry a native son of the unspecified small Southern town where the play takes place and then moves back and forth in time to show the events leading up to that murder as well as the prosecution of Lyle Britten the white man accused of the killing, in retaliation for a confrontation between Richard and Lyle Britten and his wife Jo in their grocery store. Richard’s father, the Reverend Meridian Henry, his grandmother Mother Henry and the rest of the African-American community are convinced that Lyle is guilty largely due to his past history that includes a similar incident where he probably killed another black man in town. Meanwhile the local white editor of the newspaper, Parnell James, who is a progressive liberal and a friend to both Meridian Henry and Lyle Britten tries to bridge the gap between the two communities but finds himself caught in the middle in this tragedy.

Despite the fact Baldwin was primarily a writer of novels, essays and commentary, he also had strong skills as a playwright a form he only explored with  in creating this play and an earlier work, The Amen Corner. Blue for Mister Charlie is a strong sophomore work with an elaborate structure of shifting back and forth in the narrative; a powerful use of explosive dialogue and a devastating dramatic arc. It’s a passionate fiery work and not only works as a powerful portrayal of fractured race relations in 20th century America but just solely as a piece of dramatic literature. It’s not a perfect work; the characters can seem a bit too obvious at times and the courtroom theatrics get a tad out of hand…Blues for Mister Charlie is not subtle but it’s not really meant to be. The cast of James Baldwin’s BLUES FOR MISTER CHARLIE

Despite the fact it’s not a play by Tennessee Williams, which is obviously part of the mandate of The Williams Project, the daring theatrical collective created by Ryan Guzzo Purcell who so ably directs this specific production, Blues for Mister Charlie fits in perfectly with their mission of creating unique interpretations in a collaborative environment with like minded theater artists. The company uses long rehearsal/workshop periods to build their productions from the ground up. The company wowed Seattle audiences a couple years back with their delightfully refreshing take on Tennessee Williams’ Orpheus Descending and they do much the same here with Baldwin’s work as the troupe utilizes creative movement and music to embody this production with a freshness that makes it relevant and compelling to modern audiences.

This production uses very little practical stagecraft in this production which is being produced for 9 performances only at two non-traditional venues. Opening weekend (September 6 through 10th) at Emerald City Bible Fellowship  and from September 14 through the 17th at Franklin High School, both locations in South Seattle. Fully costumed with props but basic lighting and sound design and featuring live music, this show relies on the innovative staging by Ryan Guzzo Purcell and the strong ensemble of actors who all give committed and passionate performances. Both Ryan Williams French as Richard Henry and Leicester Landon as his accused killer Lyle Britten are superbly focused and powerfully centered with their work here, as is Max Rosenak as the editor Parnell James who tries to create a bridge between the two communities. Reggie D. White handles multiple roles superbly in the ensemble and Rafael Jordan is fiercely compelling as the pastor father who struggles with his faith as a Christian in a world where black lives don’t apparently matter as much as white ones. But, the entire acting company excels as do the musicians and singers who form an integral part of this ensemble where music is an integral part of the fabric of this production.

It’s a sad fact that Baldwin’s 1964 work is just as relevant today as it was 53 years ago. But, the artistry and power of those words continue to be a valuable expression of both the fight for social justice as well as a beautifully created and passionate artistic interpretation.  Blues for Mister Charlie is highly recommended for audiences that need to witness theater that has both a soul and a powerful message.

Slowly but surely, live and in-person theater/performance events are not 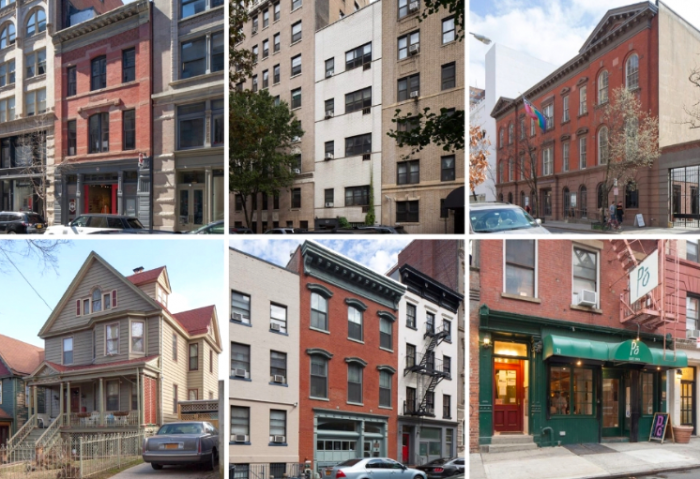 Six buildings in New York City of significance to the 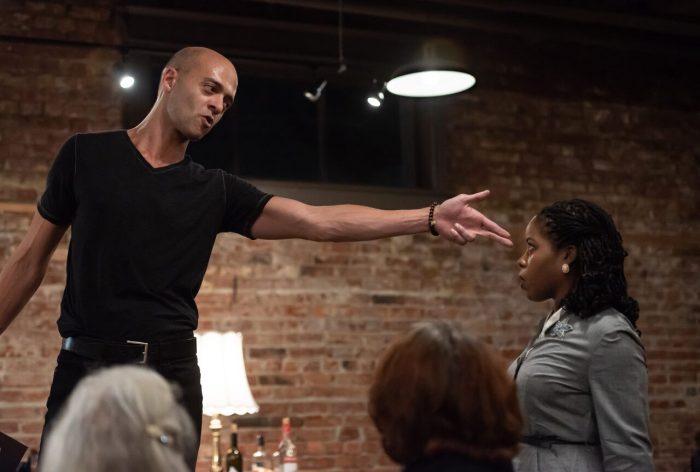 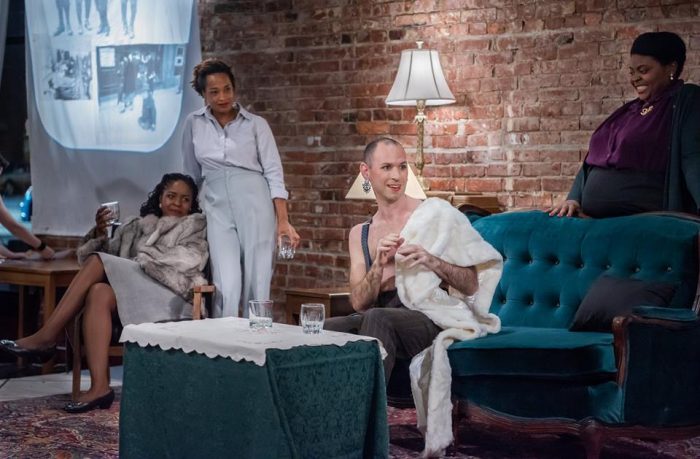 The Williams Project, led by director Ryan Purcell, has been 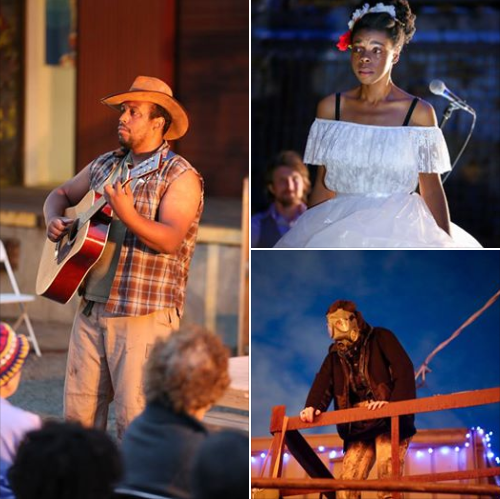 Outdoor theater is not one of my favorite things. Bugs…fussy 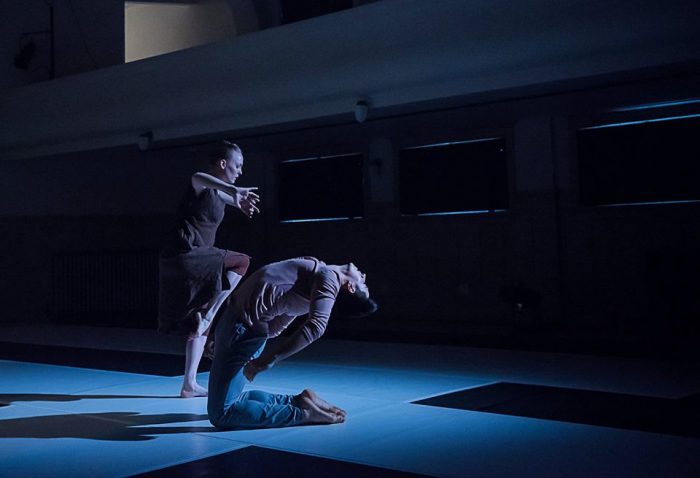 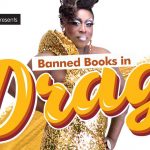 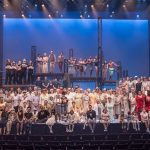