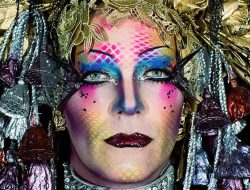 My favorite Canadian wildlife tv show hosts/brothers from ‘back in the day’, Martin (the blonde) and Chris (the yummy brunette) Kratt are coming to Seattle! The humpy brothers and actual zoologists came to our attention years ago hosting a series of wildlife shows for kids including “Zoboomafoo” (the one with the annoying puppets) and “Kratt’s Creatures”. We especially liked it when they stripped down to get WET!

Yes…Don’t judge me!!! What gay man hasn’t watched family oriented tv shows because they enjoy the humpy hosts and stars? Case in point, this guy, Sportacus from Nick Jr.’s “LazyTown”…who wouldn’t want to become the future Ex-Mrs. Sportacus for one night with arms like that? The adorable Kratt Brothers weren’t quite as ripped as old Sporty, but still…who wouldn’t want an imaginary boyfriend with a cute Canadian accent, a tight bod and access to koala bears and tiger cubs?

The Kratt Bros are smart enough to let cartoons do all the heavy lifting now…their current show, The Wild Kratts is animated, though the real bros do introduce the episodes. They also do a LIVE stage show which is obviously a FAMILY event and it’s coming to Seattle in September. Even if they’re not quite as dreamy as their early 2000s selves (who is?) you should grab your kids or be a good guncle or gauntie and grab the nephews/nieces and go check it out for a chance to enjoy the cute animals and the cute but aging hosts.

Wild Kratts LIVE! announces a NEW tour and an ALL-NEW show – and it’s coming to Seattle!

The Wild Kratts LIVE! stage show that has kids across North America buzzing is coming to Seattle with an ALL NEW show: “Wild Kratts LIVE 2.0 – Activate Creature Power!” Get ready to dive into another classic Wild Kratts adventure with the Kratt brothers as they combine live action and animation, with Martin and Chris LIVE on stage and the rest of the Wild Kratts team on screen, at the Tortuga HQ. Which creature powers will they activate and what new and amazing ‘WOW!’ facts will you learn? Experience, live-on-stage, the electrifying excitement and the inspiring quest of the Kratt Brothers that make the hit television series Wild Kratts a family favorite time and time again!

Wild Kratts LIVE 2.0 will be at Paramount Theatre in Seattle on Sunday, September 30, 2018 at 1PM. Tickets go on sale Friday, April 27, 2018 at 10:00AM via Ticketmaster.com, 800-745-3000 or the Paramount Theatre Box Office. A limited number of VIP tickets will be available. Each VIP ticket includes a premium seat at the show, a meet and greet with Chris and Martin Kratt, a personally autographed color photo, and photograph with the brothers that is taken with a personal camera.

Since 2014, Wild Kratts LIVE! has performed over 225 shows for hundreds of thousands of fans in over 135 cities across North America. It was created for the stage by the imaginative minds of Martin and Chris Kratt from Zoboomafoo, Kratt’s Creatures, and Kratt Bros. Be the Creature. The PBS KIDS TV show, Wild Kratts, was created and developed by brothers and zoologists Martin and Chris Kratt and is currently in its sixth season. The series follows the animated versions of the Kratt brothers and their friends on hilarious expeditions with wild animals from around the world, complete with animal-inspired gadgets and awesome Creature Power Suits that enable the adventurers to get close to the creatures. The real-life Chris and Martin introduce each Wild Kratts episode with a live-action segment that imagines what it would be like to experience a never-before-seen wildlife occurrence, and asks, “What if…?” to set the story in motion.

Wild Kratts has recently been nominated for a 6 Daytime Emmy, most recently a 2018 nomination for Best Children’s Animated Program. The series is a co-production of the Kratt Brothers Company and 9 Story Entertainment. One Response to SQUEEEEE! The Kratt Brothers Are Coming!!!