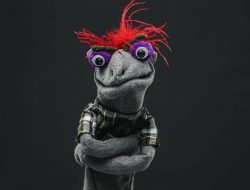 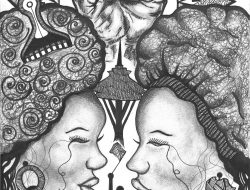 CHRISTINE AND THE QUEENS Photo credit: Suffo Monclao – hi-res HERE
Christine and the Queens makes her eagerly anticipated comeback with new single “Girlfriend,” available to stream and download now via Because Music. “Girlfriend” is Christine and the Queens’ first new song since her already iconic debut album Chaleur Humaine (titled Christine and the Queens in North America).
Besides her debut being a tremendous critical success selling 1.3 million units across the world, she toured North-America multiple times, played Coachella, Governors Ball, as well as performed “Tilted” on numerous late night shows such as The Tonight Show Starring Jimmy Fallon, The Daily Show with Trevor Noah and Late Night with Seth Meyers. Christine and the Queens gained rave reviews across the board from New York Times, Pitchfork to Vogue and she graced the cover of Time Magazine‘s “Next Generation Leaders” issue where she was proclaimed to be one of the most influential young creatives in the world.
Listen to “Girlfriend” – http://smarturl.it/DamndismoiGirlfriend + YT
If Christine and the Queens/Chaleur Humaine was an introduction to Christine and the Queens AKA Héloïse Letissier, then “Girlfriend” is a bold declaration of the next chapter in her story. She’s stepping away from her debut album towards a tougher, more minimalist, and more upbeat sound, which finds its most direct expression on “Girlfriend”. The track – written and produced by Letissier – pays tribute to her long-time love of the G-funk sound, and in order to get it exactly right, she tracked down one of its pioneers, Dâm-Funk, and asked him to sing and play on it.
“Don’t feel like a girlfriend, but lover, damn, I’d be your lover.”
Not only does the sound have a newfound muscle, so too does the tone, which marks a naked shift of energy, from the “teenage years” mood that fuelled much of her debut, towards a more provocative and exhilarating expression of confidence, sex, anger, lust, and, crucially, macho swagger. Throughout, “Girlfriend” questions identity and plays with the performance of gender, and how the codes of “masculinity” are disrupted if the player isn’t a man.
“I initially set out to smash against macho culture and macho men,” says Letissier. “I became obsessed with this idea of the macho man, and still being a woman. What does it mean if I’m this figure, and I’m a woman? Does it make me an aberration? Is it joyful?”
The song, too, is overwhelmed with desire. “I felt I had to address female desire and it’s diversity,” she says. “How sometimes it’s blacked out or ignored. It’s still something quite suspicious or slightly dirty. I felt like it was important to be more unapologetic about that.”
“There are hints of nights spent having sex and coming back covered in sweat. Like a male figure, the young hero who has love stories, and comes back in the morning and his friends are like: “What happened to you?” I want to be that.”
Christine and the Queens will perform live for the first time at Radio 1’s Biggest Weekend in UK, on Sunday 27 May. She has announced a full tour of Europe, Canada and the United States for the fall. See below for the full list of dates.
See christineandthequeens.com for ticket information.
11 October – LUXEMBOURG, LUX @ ROCKHAL
12 October – BRUXELLES, BE @ FOREST NATIONAL
13 October – AMSTERDAM, NL @ AFAS LIVE
15 October – BERLIN, GER @ COLUMBIAHALLE
17 October – STOCKHOLM, SE @ NOBELBERGET
23 October – SEATTLE, WA @ THE SHOWBOX
26 October – OAKLAND, CA @ FOX THEATER
27 October – LOS ANGELES, CA @ THE WILTERN
31 October – NEW YORK, NY @ BROOKLYN STEEL – SOLD OUT
01 November – NEW YORK, NY @ BROOKLYN STEEL
02 November – PHILADELPHIA, PA @ UNION TRANSFER
04 November – WASHINGTON, DC @ 9:30 CLUB
05 November – TORONTO, CAN @ THE DANFORTH MUSIC HALL
06 November – MONTREAL, CAN @ PLACE BELL
17 November – BOURNEMOUTH, UK @ BIC
20 November – LONDON, UK @ EVENTIM APOLLO – SOLD OUT
21 November – LONDON, UK @ EVENTIM APOLLO – SOLD OUT
23 November – GLASGOW, UK @ ROYAL CONCERT HALL
24 November – EDINBURGH, UK @ USHER HALL
26 November – BIRMINGHAM, UK @ O2 ACADEMY
27 November – MANCHESTER, UK @ O2 APOLLO
30 November – DUBLIN, IRL @ RDS
04 December – NANTES, FR @ ZENITH
05 December – BORDEAUX, FR @ METROPOLE ARENA
06 December – MONTPELLIER, FR @ ZENITH SUD
11 December – GENEVE, FR @ ARENA
12 December – STRASBOURG, FR @ ZENITH
14 December – LYON, FR @ HALLE TONY GARNIER
15 December – TOULOUSE, FR @ ZENITH
18 December – PARIS, FR @ ACCORHOTELS ARENA
http://christineandthequeens.com
http://www.because.tv