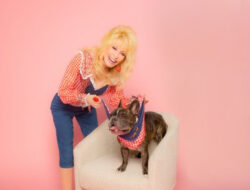 Summer Is (Mostly) Over But The 5th Avenue Theatre...

You got to balance the sweet with the spicy…thus, you pair a Dolly Parton post with a post about Christeene, the delightfully demonic queer performance artiste and singer!

Christeene is announcing her new full length album is coming out on November 11 and how can I not promote something with such a delightfully provocative title as:

It just rolls off the tongue, doesn’t it?

Do you board the Midnite Fukk Train at the same station we board for the Midnight Train To Georgia?

And, to tempt our appetites for that midnite fukk train, she’s releasing a new single right NOW!

Sadly, its name, while exotic, isn’t as delightfully naughty…but still. we like the name “Beaucoup Morocco”!

Also: Isn’t it time someone book Christeene for Seattle again?

With a voice described by The Guardian as “…Tina Turner or Diamanda Galás at full stretch, at the pitch of Slipknot’s Corey Taylor,” the artist delivers a cripplingly heroic collection of songs articulating a raw, popular rage in these troubling times. MIDNITE FUKK TRAIN will be pressed on a special edition “unhealthy piss yellow” vinyl.

In a nod to Amanda Lear, CHRISTEENE punches through the opening track “ALPHABETS” with words for the children of her generation, continuing her delightful onslaught with “BEAUCOUP MOROCCO,” “GUTT IT,” and a western punk’d “WINSTON,” before shifting cars mid trip with a delirious and dark “I WANNIT ALL,” reminiscent of David Lynch on a ketamine trip. In a surprise turn, CHRISTEENE tickles the ivories with raw, poetic sensitivity in “PIANO SONG,” and spins a lush arrangement of loneliness in “LO PAID RUNWAY MODEL,” only to turn around with full force and drag her freshman track “FIX MY DICK” through the “Fukkn Band” she has gleaned for this powerful and arresting album.

CHRISTEENE is a raw spirit of ferocious music, unabashed sexuality, and fiery intimate stank. Reports from live shows describe inexplicably powerful experiences, distressed choreography, macabre scenes involving butt plugs tied to bouquets of balloons being released from the singer’s ass, wardrobes styled from the forgotten scraps of society, and intimately heated sermons on the state of the world as we know it.

Man on Man, Martin Rev (Suicide), and others