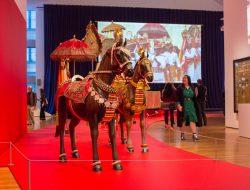 “We are excited to announce that we will be moving in with our long-time partner Gay City, Seattle’s LGBTQ Center. We will start our move over on December 14th and will be full-time at Gay City by late December,” said Three Dollar Bill Cinema Executive Director, Ben McCarthy, in a letter to the community. “This move will not only allow us the opportunity to work more closely with Gay City, it will provide Three Dollar Bill Cinema with an opportunity to continue to regain financial stability as we navigate through some rough organizational waters.”

“Three Dollar Bill Cinema has been in 12th Avenue Arts since the building opened. They are a vital member of the Capitol Hill community and we’re sorry to that they will no longer have offices in the building. However, we’re honored to have Ben McCarthy joining the Capitol Hill Arts District Steering Committee and remaining part of the arts on the hill,” said Michael Seiwerath, VP of Advancement and External Affairs at Capitol Hill Housing.

“Gay City is excited to welcome Three Dollar Bill Cinema into our space, and to continue the tradition of having community partners co-locate with us in our LGBTQ Center,” said Fred Swanson, Gay City Executive Director. “Our two organizations have a long history of successful collaboration on film projects, fundraisers and community events. Moving in together will increase our ability to work on joint projects, support LGBTQ film and art and create a dynamic and vibrant community hub at Gay City.”

The move is nothing new for Three Dollar Bill Cinema…over the years the group has had office space in several locations on Capitol Hill including  Oddfellows Hall and Northwest Film Forum.

This also marks a change for Gay City. The non-profit lost a sub-tenant earlier this fall when longtime partner Kaladi Brothers Coffee moved out of their shared space into their own home next door to Gay City. In recent weeks, Gay City has moved their library into the space previously occupied by Kaladi Brothers.

The press release also reassures us that Three Dollar Bill’s programming will not be affected by the move:

So, it looks like the Academy Awards party is returning in 2019 (it wasn’t held this year due to the transition from the previous Three Dollar Bill executive director, Jason Plourde to the current director at the start of the year) as well as the return of Reel Queer Youth which was also canceled for 2018.

We’ve reached out for confirmation on both those statements.

ADDED: And, I have confirmation that both the Academy Awards party and Reel Queer Youth will return for 2019! More details as they emerge.