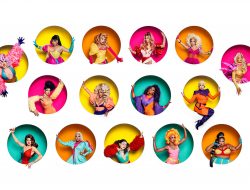 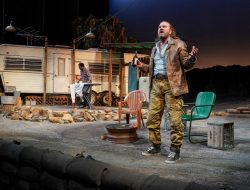 Review: Seattle Rep’s “Last of the Boys”…Reflection on Ghosts...

March Katya Show Moves To The Moore/More Tix Open Up The blond  diva was supposed to bop into Seattle last year as part of her nationwide tour with the show but the star decided she needed a mental health break and retreated from performing for several months. All her shows were rescheduled, including Seattle for March of this year at the Egyptian Cinema on Capitol Hill but area promoter/producer Five Senses Reeling announced this week that the show is now scheduled for March 13th but will move to the far larger Moore Theatre in downtown Seattle.

Apparently, all current ticket holders for the original show will have those tickets honored at the new venue. NEW ticket buyers should go HERE to snag them.

Five Senses Reeling is also presenting the Katya show at venues all over the Western US and Canada including shows set for Vancouver British Columbia, Boise, Portland, Salt Lake City, San Francisco and Phoenix.

Help Me I’m Dying: An Evening of Comedy with Katya Zamolodchikova

Due to unprecedented demand, Katya’s one-woman comedy show originally scheduled at The Egyptian is moving to The Moore Theatre, located at 1932 2nd Avenue in Seattle.

Show date and times remain the same. Additional tickets go on sale Friday at 10 am through Ticketmaster.

All tickets purchased for The Egyptian performance will be honored in their original form at The Moore Theatre.

We apologize for any inconveniences, but we are excited to offer this show to many more Seattleites. With added new tour dates and sold out VIP across the entire tour, the show is in fierce demand and we’re excited for what’s in store!

Direct any questions and concerns to info@fivesensesreeling.com! The venue and Ticketmaster will not be able to service existing ticketholders (through Brown Paper Tickets).

The show with be PG-13 in content but will be an ALL AGES show.