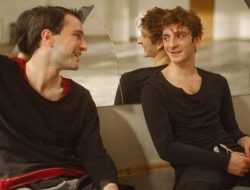 “And Then We Danced” Is The Queer Georgian Dance... 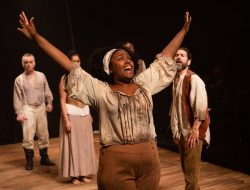 In the 5th Avenue Theatre’s never ending quest to create new musicals that will hopefully go on to Broadway and win Tony Awards and endless royalty checks, they’ve just debuted a “new kind of musical” called BLISS which is the 2,345th musical theater entertainment that takes place in Fairy Tale Land and features feisty princesses seeking “Happily Ever After”.

Only this time, Bliss is a modern kind of “woke” musical and they’re keen to crush the patriarchy and promote womxn power and generally be very very 2020 in an intersectional yet respectful way so they don’t really piss off anyone enough that they would boycott the show.

And, because this is a DIFFERENT kind of fairy tale musical theater piece, we’re not just gonna get ONE fairy tale princess seeking happiness, but FOUR of them who happen to be SISTERS of about the same age, who all live together in a tower of their father’s castle because he’s the ultimate in helicoptering parents and doesn’t want his girls to be hurt by the outside world.

Of course one sister is smart and one is a warrior and one is boy crazy and one is goofy and vaguely asexual and of course they figure out a way to escape their tower and start living life to the fullest by venturing over to the neighboring fairy tale kingdom which conveniently has a handsome albeit vacuous prince in need of a bride.

Oh, and instead of Fairy Godmother we have a Fairy GodFATHER who is confusingly set up as a comic foil for our heroines but is apparently the quasi-villain who is responsible for many of the obstacles of the plot but it’s ok because he’s very funny and played by the very funny and out gay actor/comedian Mario Cantone.

On digital paper it sounds fine…not particularly original actually since all the big changes in the traditional fairy tale story are pretty superficial. Despite all the Grrrrrrl Power politics, it’s still a basic fairy tale show about getting your dreams to come true.

But, the show has problems…many, many problems. It has too many princesses for one thing. You’d think it was about all FOUR of the sisters sharing the story but really it’s the Smart Princess Sister who takes center stage…she likes science and she only wants to marry the prince so she can have the power to make social changes like promoting ogre rights. But, the Sneaky Fairy Godfather persuades her to stray from her vague feminist convictions and “pretty herself up” in order to trap the Prince who really isn’t that interested in her.

Meanwhile, the other three sisters are just…padding? Comic relief? They’re mostly shuffled off to the sides. Warrior Princess Sister wants to fight a dragon and eventually gets to but it’s an offstage dragon since we don’t have a huge budget here for any kind of effects or really any thing magical at all…for a show set in Fairy Tale Land which mentions all the usual suspects like dragons, gnomes and elves we never actually SEE any of those things or anything very magical at all other than an actor dressed up as a unicorn for the goofy/nerdy/vaguely asexual or lesbian Princess Sister to interact with…it’s quite obvious that Disney isn’t paying the bills here.

As for the Fairy Godfather, he’s actually a bit problematic for a show that’s supposed to be “woke” and considerate of oppressed people. There’s non-stop “fairy” jokes and the character is very stereotypical in that overtly obnoxious screaming queen sort of way that Mr. Cantone is so good at playing. And, that’s not a dig at him; we like Mario Cantone! But, the non-stop snarky “fairy” jokes are lazy and the fact the character is the only real villain is annoying. The writers of the show apparently really loved the idea of a fairy godfather but never really create an interesting or plausible character. In fact, their Fairy Godfather really just seems like a pathetic retread of the funny Fairy Godmother character in the cartoon film Shrek 2, voiced so memorably by British actress Jennifer Saunders. But, ripping off another show doesn’t really make for good theater.

And, that’s really what Bliss is…it would VERY much like to be as charming and beloved as Shrek but the writers/creators haven’t come up with a story that’s as good or interesting. Instead, it’s just a bland hybrid of things from the Shrek Multiverse and several other fairy tale stories and overlaid with a dull veneer of political correctness (except when it comes to fairies.) There’s also very much the whiff of the whole thing being a production concocted by Mattel to market a new line of “Bliss Barbie Dolls” to market to 8 year old little girls….except there are not dolls, just dull flat paper doll characters inhabiting the stage singing mostly forgettable songs.

What Bliss does have going for it, is a charming cast of actors. Despite the caricature of a character he has to portray, Mario Cantone is great fun even when trying to land the many, many stale jokes. The four princesses are all very talented but I especially liked the wonderful Claire Neumann as the goofy/nerdy/vaguely asexual or lesbian Princess Sister who managed to steal pretty much every scene she was in. And, while we really couldn’t understand a single mumbly word he sang and his characterization was such a tired “dude/bro” cliché I also liked Conor Ryan’s vapid, party loving next door neighbor Prince, and not just because he has a nice body. Well, maybe just a little; those abs WERE sweet.

Will this make it to Broadway? Should it make it to Broadway? Well, who knows? Stranger things and worse shows have made it (some of them started at the 5th Avenue like the Kathie Lee Gifford abomination “Scandalous/Saving Aimee”) but maybe the creators of Bliss should just poke Mattel and see if they want a show to promote a new toy line.