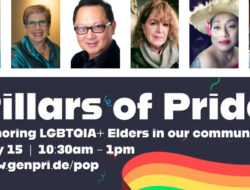 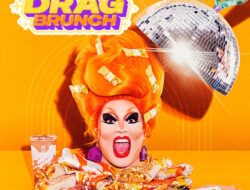 Run To The Border…With A Drag Queen At Taco...

Seattle PrideFest, the producers of the city’s annual LGBTQ+ pride festivals that happen on the last weekend of June (and NOT the Seattle Parade people and NOT the Capitol Hill Pride group who got in trouble last year for some racially insensitive remarks) have announced headliners for the big Pride Sunday festival to happen at Seattle Center on June 26, 2022.

Coming back to a traditional last weekend in June, live and in-person series of events after being canceled for two years due to Covid-19, this year’s PrideFest theme is very appropriate….”We’re Still Here” which, in their words: celebrates the resiliency of the LGBTQIA+ community and reaffirms our communities’ fight for a more equitable and inclusive world.”

PrideFest did stage virtual online events in 2020 and in 2021 the group produced a live street festival on Capitol Hill’s Broadway in September. This year will be their first “back to normal” production since 2019 with the group producing festival events back on Capitol Hill for Pride Saturday, June 25th, and then at Seattle Center on Sunday after the city’s Pride Parade (produced by Seattle Pride/Seattle Out and Proud).

The headliners for 2022 include an up and coming young singer, Jake Wesley Rogers who has received a lot of media attention in the last six months with big write ups in the press and appearances on Ellen and other national TV shows and glowing recommendations from other stars like Elton John. We gushed about the rising star just a few months ago in a post on SGS: https://seattlegayscene.com/2021/10/new-music-we-looooove-pluto-by-the-adorably-talented-jake-wesley-rogers/

For fans of HBO Max’s hit show Legendary, the competitive ball culture show that is entering its third season, the appearance of stars from that show will be a treat for PrideFest attendees. The Music Supervisors and cast from the show, the husband and wife duo of “Purple Crush” (including Isla Ebony), will headline along with “King of the West Coast” Enyce. PLUS, special guests for a huge West Coast style Ball Showcase. Purple Crush have performed at PrideFest in the past; the adorable couple are Seattle area natives!

There’ll also be RuPaul Drag Race stars in the house for Seattle PrideFest 2022 to join the hordes of already announced drag divas appearing at other events all over the city during Pride Weekend. From Season Nine of RPDR, AJA will perform as well as Monét X Change from Season Ten and the co-winner of RPDR: All-Stars Season Four.

AND, superstar DJ Brynn Taylor will also headline on the DJ Stage at Sunday PrideFest.

More names to perform will be announced in the weeks ahead.

Here would be the point for me to include a link to buy tickets but….SEATTLE PRIDEFEST IS A FREE EVENT!!!

More about the headliners from the press release:

Today, PrideFest is proud to announce its first set of headliners for PrideFest at Seattle Center on Sunday, June 26.

Jake Wesley Rogers
The 25-year-old phenom Jake Wesley Rogers will be gracing the PrideFest stage this June. With talents like Elton John and the looks of David Bowie, Rogers is an expressive, emotive, unique, GenZ, Tik-Tok artist who is taking the music world by storm. As he told Vogue last winter: “As a creator aligning with the art I’m supposed to make, and step into, and be, I think it’s going to be my most favorite year so far. We’re going to build this rocket ship while we’re flying!” To get a sense of Rogers’ talent, listen to his very personal EP Pluto, with its soaring arrangements and intimate, heartbreaking lyrics. Prior to his performance at PrideFest, Rogers will be featured on a May edition of the organization’s PrideCast.

Legendary Ball Showcase (from HBO Max’s Legendary)
With the success of shows like Legendary and Pose, Ball Culture is having its day in the public eye, but the history of Ball goes back many decades. The Music Supervisors and cast from Legendary, Purple Crush (including Isla Ebony), will join up with “King of the West Coast” Enyce as well as many special guests for a Ball showcase that you won’t want to miss!

Monét X Change
Monét X Change, is a drag queen, singer, podcaster, and reality TV personality. She is known for having competed on RuPaul’s Drag Race Season 10, and as the winner of RuPaul’s Drag Race All Stars 4 along with Trinity the Tuck. She will return with an all-winners cast for All Stars 7. She’s a singer and a podcaster. You can listen to her on the Sibling Rivalry podcast with Bob The Drag Queen, and the Ebony and Irony podcast with Lady Bunny.

DJ Brynn Taylor
Since her arrival to Los Angeles in 2005, Brynn Taylor has earned her place as one of the most versatile and skilled female DJs in Los Angeles, but she is known throughout the United States. She has maintained several DJ residencies at high-profile venues on both coasts, including The Abbey in West Hollywood and has been a guest DJ at ultra-hip Hollywood joints such as LAX, Kress, Boulevard 3 and Falcon, where she has played for the likes of both Paris and Perez Hilton.