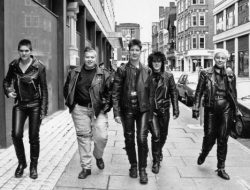 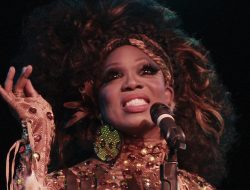 QTBIPOC Centered Programming at SQFF Including A BeBe Zahara...

Well, if that isn’t a lyric to make an LGBTQ person get a tad weepy…I need a KLEENIX!

The lyrics and music are from the ridiculously talented gay singer/songwriter JAKE WESLEY ROGERS and if he isn’t the next big thing, I don’t know what is…he’s got a gorgeous voice and the charm of a magical changeling and he’s going PLACES and I don’t think it’s Pluto, that distant planet that may or may not be a real planet but we love it anyway.

AND, we’re not the only ones to gush…Elton John practically crowned Jake Wesley, well, the next Elton John and said “I love him because he reminds me of me when I was starting out” and praised Jake’s songwriting; “What I love as a songwriter is that his songs are so beautifully formed.”

On top of that love, EGT winner Ben Platt personally chose Rogers to open up his North American headline tour, kicking off February 23, 2022 at Amway Center in Orlando, FL. which will include stops in Seattle on March 30, 2022 and in Portland, OR the following day. Frankly, we don’t know why he isn’t headling his OWN tour!

More gush from the press release and we’re sure we’re gonna hear a lot more from this rising star in the future:

After months of anticipation, singer, songwriter, and multi-instrumentalist Jake Wesley Rogers propels himself into the stratosphere with the release of his label debut EP Pluto, available now via Facet Records/Warner Records – listen HERE. He also just shared the music video for the new single “Pluto” – watch HERE.

On the track, rich piano, cinematic strings, and a gospel choir underscore his confessional delivery as he urges, “Hate on me. Hate on me. Hate on me. Maybe at the end of the day, me and you are both the same, we just want to be loved.” The accompanying visual amplifies the emotional impact with an intense performance from Jake. At the same time, the surreal clip presents a different kind of origin story as our hero embraces the power to really take flight from within.

The Pluto EP features previously released singles “Weddings & Funerals,” “Middle of Love,” and “Momentary,” along with 3 new tracks. Regarding the EP, he commented, “I began writing the Pluto EP in London in 2019 when my grandpa was dying from heartbreak and my lover and I were nearing the end of our relationship. Working with some of my dream songwriters like Eg White and Justin Tranter, I went deeper than I ever have before in exploring my relationship with love and how it’s taken a toll on me and everyone around me.”

After Zane Lowe debuted “Middle of Love” earlier this year on his Apple Music 1 radio show and hailed him as “wildly talented,” Jake has gone on to incite unanimous tastemaker praise for every release since from People, Billboard, Rolling Stone, American Songwriter, and PAPER. In addition to the media buzz, Jake has also attracted the attention and support of other high-profile celebrities such as Kate Hudson, Sam Smith, Ryan Reynolds, Blake Lively, Zoe Kravitz, Gwyneth Paltrow, Olivia Wilde, Adam Lambert, Zoe Saldana, Hilary Swank, Courtney Love, Paris Jackson, Den Levy, and more. Jake previously sat down with GRAMMY® Hall of Fame legend Sir Elton John as a guest on his Apple Music radio show Rocket Hour‘s 300th episode. About Jake, Elton gushed, “I love him because he reminds me of me when I was starting out” and praised Jake’s songwriting; “What I love as a songwriter is that his songs are so beautifully formed.”  After singing a spontaneous duet onstage recently during Jake’s performance at The Elizabeth Taylor Foundation Ball to End AIDS, Tony®, EMMY®, and GRAMMY® Award-winning icon Billy Porter proclaimed, “This is the future!”

Born in Kansas City, MO, Jake Wesley Rogers combines skyscraping vocals, eloquent songcraft, and driving instrumentation to give pop a jolt of infectious integrity and soaring spirit. Generating 20 million-plus streams independently, he captivated a growing fanbase with various singles and the Evergreen EP [2017] and Spiritual EP [2019]. Grammy-nominated songwriter Justin Tranter heard the powerful and poetic “Jacob From The Bible,” fell in love with Jake’s music, and signed him to Facet Records/Warner Records in 2020. Jake Wesley Rogers’ bold music is queer storytelling refracted through a universal lens; it’s inspired by the authenticity and artistry of his heroes like Madonna, Stevie Nicks, and Florence + the Machine. His songs are for everyone, but they’re special treats for those who know and share his experiences. Jake has turned his most formative years into some of the most stunning and evocative music you’ll hear this year.