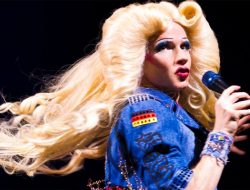 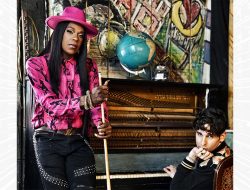 Ben Platt in the upcoming Ryan Murphy show THE POLITICIAN dropping on Netflix on September 27, 2019.

OK…the dude is very talented. And, an out gay man.

But, how much longer are we going to be seeing Tony Award winning actor Ben Platt play high school kids? He’s 25 but he’s one of those dudes who looks mature for his age….he had “Hot Dad Face” when he was 20. We could buy him as a teen in his award winning role in Broadway’s Dear Evan Hansen but he’s STILL getting cast as a high schooler in the upcoming new Netflix series from superstar TV producer Ryan Murphy.

It’s THE POLITICIAN  and it has the usual Ryan Murphy killer cast including Gwyneth Paltrow, Jessica Lange, and Bob Balaban in main roles plus guest spots from Dylan McDermott, January Jones, Judith Light and Bette Midler. Jessica Lange in the upcoming Ryan Murphy show THE POLITICIAN dropping on Netflix on September 27, 2019.

More cast in the upcoming Ryan Murphy show THE POLITICIAN dropping on Netflix on September 27, 2019.