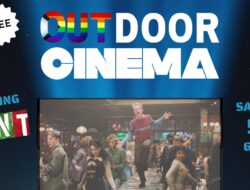 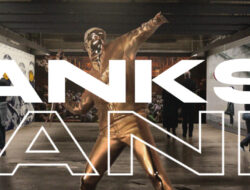 Banksyland Is Coming To Seattle

So much to love in the new mini-album, Disco Automatic, from Australian singer/DJ/artist TANZER…including the video for the song, “Destination Love” which also stars the queer art duo of The Huxleys.

In celebration of the release of her brand new mini-album Disco Automatic, Australian-based singer, DJ, artist and proud queer community member Tanzer has released the music video for “Destination Love” featuring queer art duo The Huxleys. Watch the new music video, a colorful voyage through queertopia and beyond, HERE!
In the music video, directed and edited by The Huxleys, Tanzer travels through a backdrop of scenic destinations accompanied by a glamorous squad of queer characters including the incomparable duo The Huxleys. A Eurotrash fever dream, the video mixes kitsch Australiana with projections of a fictional ‘dolce vita holiday’ to Italy, their favorite destination. The hypercolor music video references everything from Leigh Bowery to Tweety Bird to Jean Paul Gaultier, ready to leave you in a glittery daze.

In addition to releasing “Destination Love,” Tanzer has released her mini-album Disco Automatic. The 6-song release shows the range of Tanzer’s multi-hyphenate abilities in all of its disco, pop, operatic majesty. The accompanying videos also dazzle with an array of themes from Drag (including Tanzer’s Drag King persona) to Sci-Fi and so much more.

Tanzer traveled all the way from Australia to the micro-state of San Marino this year to enter “Fantasy” into the national final for the Eurovision Song Contest – a lifelong dream for Tanzer, who grew up in Rome, Italy watching the infamous song competition. She may not have won the chance to perform at Eurovision, but she amassed a huge cult following along the way, with countless fans glued to her high-camp Instagram video diaries documenting her Eurovision adventure.

Disco Automatic has some of Tanzer’s previously released tracks including her disco-tinged single “Fantasy.” The accompanying music video is a sci-fi heartbreak epic and ode to doomed love. In the video, directed by Alex Smith, Tanzer urges her toxic lover to abandon all logic and reason for one more sip of poison before their inevitable demise. The mini-album will also include the previously released track “Tango,” a bizarre, funky disco banger featuring lyrics in English and shabby Australian-Italian and “Deep Fried Disco,” which was inspired by the fantastic, camp songs we all know and love.