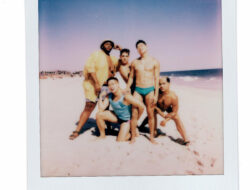 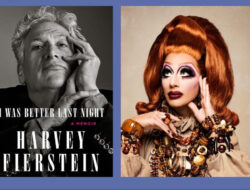 And, for you Eurovision fans, she’s also a big fanatic about the annual song competition and made a pilgirmage to try and get into the next contest.

We like to think that if she had been around back in the late 70s, she could have been a very special musical guest on an episode of “Buck Rogers in the 25th Century” and hanging out with Twiki while clinging to Gil Gerard’s awesomely hairy chest and avoiding Colonel Wilma’s death glares.

So much more about Tanzer:

In the music video, directed by Alex Smith, Tanzer urges her toxic lover to abandon all logic and reason for one more sip of poison before their inevitable demise. The video was shot on tube-based cameras from the late ‘70s, and was inspired by the retro-futuristic camp of Barbarella, Cicciolina’s ‘80s TV performances, and the promotional videos of spiritual group Unarius Academy Of Science.

In addition to releasing “Fantasy,” Tanzer has announced her upcoming mini-album Disco Automatic, which will arrive on April 22, 2022. The 6-song release shows the range of Tanzer’s multi-hyphenate abilities in all of its disco, pop, operatic majesty. The accompanying videos also dazzle with an array of themes from Drag (including Tanzer’s Drag King persona) to Sci-Fi and so much more.

Tanzer traveled all the way from Australia to the micro-state of San Marino this year to enter “Fantasy” into the national final for the Eurovision Song Contest – a lifelong dream for Tanzer, who grew up in Rome, Italy watching the infamous song competition. She may not have won the chance to perform at Eurovision, but she amassed a huge cult following along the way, with countless fans glued to her high-camp Instagram video diaries documenting her Eurovision adventure.

Disco Automatic will include some of Tanzer’s previously released tracks including “Deep Fried Disco,” which was inspired by the fantastic, camp songs we all know and love. A love letter to ABBA, Sheryl Lee Ralph and 1980s Eurovision, the song tells the story of an imaginary place where one can find solace, play and escape through music. The accompanying music video paints a dazzling picture of glamour, escapism and celebration of the queer community. The mini-album will also include the previously released track “Tango,” a bizarre, funky disco banger featuring lyrics in English and shabby Australian-Italian.

ABOUT TANZER
Tanzer is in the business of escapism – and escape you shall. A singer, composer, DJ and visual artist, Tanzer is known for her cinematic, high-glamour, escapist works that are at once intensely powerful, deeply fragile and darkly humorous. Her work spans stages, clubs, galleries and festivals and fuses musical forms to a multitude of performative and artistic outcomes. Her musical compositions move from opera to disco and from the experimental to pure pop – exploring self-image, gender, romance and the power of the alter ego. Her film and curatorial works are renowned for their elaborate dreamscapes and meticulous aesthetic that take stylistic cues from ‘70s retro-futurism, Euro-camp and Australian pop culture nostalgia.