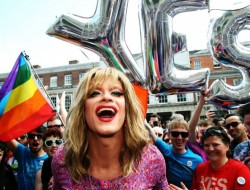 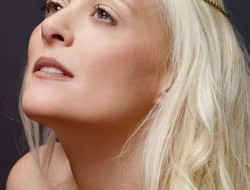 Yes, he’s sexy in a douchey Swedish sort of way, but Eurovision 2015 winner Måns Zelmerlöw has made some dumb remarks about the gay community.

Sigh. Sometimes you take two steps forward, then one step back.

Last year, the world was stunned when Austrian bearded drag queen/singer CONCHITA WURST won Eurovision 2014, the Euro-centric songwriting/performance contest that has achieved world wide attention in recent years. Conchita, aka Thomas Neuwirth, clenched the title with her power ballad, “Rise Like A Phoenix”. Wurst/Neuwirth who identifies as a gay male but uses feminine pronouns to refer to “Conchita”, became a world wide star and an icon in the international LGBTQ community.

Today, Saturday June 23rd, as Ireland celebrates the vote that legalized same-sex marriage in that country, the new Eurovision winner was crowned in Vienna, Austria. Sweden claimed the “crown” when 28 year old Måns Zelmerlöw wowed judges and the international audience with his performance of “Heroes”. (Not to be confused with the far superior David Bowie song…)

(And, to be frank, this song is insipid…but, Eurovision isn’t noted for being musically sophisticated or daring.)

It’s the 6th win for Sweden (the first was in 1974 when a little group named ABBA won with “Waterloo”…) But, it’s not so likely that the same success will follow Mr. Zelmerlöw. The main problem: little Måns-y has made some moronic statements about gay people in his native Sweden earlier this year. From The Independent:

Zelmerlöw’s appearance in the competition will likely raise eyebrows, however, after he was forced to apologise for saying that gay couples should not be parents on a celebrity cookery programme.

The 28-year-old claimed it “isn’t equally natural for men to want to sleep with one another” and branded homosexuality an “avvikelse” (abnormality), according to WiWiBloggs, before quickly adding that “there isn’t anything wrong with it at all”.

Zelmerlöw later clarified his remarks in a statement, apologising to “all who take offence”. “I believe and hope that the vast majority know that I respect differences and all forms of love,” he said. Eurovision did have plenty to offer gay fans including a very popular song from Lithuania that featured same sex couples and kissing. Monika Linkytė and Vaidas Baumila, “This Time” was a major contender. (Despite the fact, it’s also pretty insipid.)