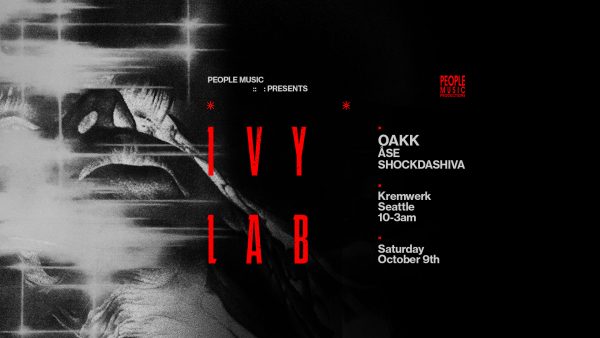 People Music Presents
IVY LAB
w/ OAKK
Local Support: Åse, ShockDaShiva
Adv Tickets are $25
There will be a small number of tickets available at the door.
21+ | 10pm – 3am | SAT Oct 9th
|| artist bios ||
IVY LAB
London, UK
soundcloud.com/ivylab
Highly sought-after London outfit, Ivy Lab, collided together in 2012 out of a
shared enthusiasm for experimentation in the UK bass music scene. The duo has marked their territory where leftfield bass and halftime meet hip-hop—a neighborhood characterized by the coalescences of both Los Angeles and London. In an effort to further invest in the emergence of their sound, Ivy Lab launched their 20/20 LDN imprint, which houses and supports hip-hop infused abstractions.
The 2018 release of their debut album, Death Don’t Always Taste Good, launched with single “Cake,” a now scene staple. Soon followed the release of the 2019 festival anthem, “Orange,” a collaborative effort with Two Fingers. With an ever-growing loyal audience in North America and 2 long-form dancefloor orientated projects behind them, Ivy Lab created space to experiment with more subdued productions. Throughout the latter of 2020, they delivered a string of EP releases: Fidget, Teacup, and Blonde, which broadcasted a more minimal expression of the duo. And now, their 2021 EP, Everythingmustchange, has proven that Ivy Lab will continue to break the mold by doubling down on under-produced minimalistic bass.
Approaching their post-lockdown debut in the states, Ivy Lab heads into their upcoming shows and festival slots with an anchored presence in the bass scene and a notable reputation as 20/20 LDN label bosses.
OAKK
Calgary, Canada
soundcloud.com/oakkmusic
OAKK produces dynamic, eclectic, and infectious bass music that is impossible to resist. His high energy DJ sets display his commitment to diversity and flow, while telling a cohesive story that covers a vast musical range and is nothing short of striking.
Musically speaking, OAKK’s catalogue is melodically beautiful and highly energetic, incorporating his respect for the cultures and communities that have influenced the musical landscape of the present. OAKK opened up 2019 with the release of the ‘Growing EP’ on Hong Kong underground bass music label ‘Unchained Recordings’, highlighted by a collaboration with Rider Shafique, which garnered attention from industry heavyweight Bassnectar. Following a slew of singles and remixes throughout the year, including an official release on Fool’s Gold Records, OAKK closed out the year with the ‘Ellipsis EP’. This collection of music marks new territory in OAKK’s career and pushes him into a creative realm of his own.
With performances at premier festivals such as Lightning in a Bottle, Shambhala and Bass Coast, as well as a Live Boiler Room set, the next step for OAKK is to expand into new territory and share his sound around the globe. The versatility of his productions and DJ sets offer an unpredictable aspect that never compromises the clarity of his vision. This intense passion for music and community has brought OAKK to his current stage, and given him the tools needed to propel his creative endeavors into the future.
Åse
Seattle, WA
soundcloud.com/alyssamariehovde
Åse is a local up-and-coming artist that has been making big waves since her debut performance in 2017. Her journey starts at the early age of six as a classically trained musician in-the-making and spans over a decade of hard work and determination. Åse received her first booking in Seattle, opening for The Flashbulb at Timbre Room, after years of practice on a Traktor S4 that had been gifted to her. Since then she has had the honors of opening for acts such as Machinedrum, The Librarian, Thelem, Woolymammoth, Eprom, OAKK, Alix Perez, ONHELL, Adiidas, as well as the PK Sound renegade stage at Emissions Festival. As the first official resident DJ for People Music, she also resides with the international label Manuka Records.
ShockDaShiva
Cascade Mountains
soundcloud.com/shockdashiva
When it comes to dark dubstep ShockDaShiva’s your man. Known for his deep wonky styles, ShockDaShiva’s been holding down the West Coast now for years. Always pushing the envelope to discover and share new talent ShockDaShiva never fails to impress. Keep an eye out for his latest foray in DnB with a gritty liquid sound he has coined Dub and Bass.
………………………………………

Due to the Washington State Mask Mandate, masks are now required while one is not actively eating or drinking.

Proof of vaccination is required to attend the venue. Read more: https://bit.ly/KWCovidPolicy

The following actions or displays of behavior will not be tolerated: bigotry, racism, sexism, transphobia, homophobia, misogyny, and ableism.

Consent is required when interacting with others. A person’s choice of self-expression is not an invitation for non-consensual touching. Any form of harassment including leering, rude comments or touching will be dealt with, and anyone caught harassing other patrons will be given a lifetime ban from our club. Our staff is here to support you.

For the sake of the vibe during dance parties, we ask that you avoid using your phones or taking photos anywhere on the dance floor. Feel free to use your phones on the patio.
………………………………………
To stay in the loop about upcoming events, ticket giveaways, and more, sign up for the Kremwerk + Timbre Room Complex mailing list!
http://www.kremwerk.com/
………………………………………
Kremwerk is currently not an ADA-accessible space. Club entry is through a flight of 12 metal stairs, with two small steps leading into the main part of the club. We have 2 restrooms with a total of 3 stalls and 1 urinal, all gender-neutral. If you would like access to single-stall restrooms, please don’t hesitate to ask our door & security to allow entry upstairs into Timbre Room, which has 2 single-stall gender-neutral restrooms. For any questions about safety & accessibility, please email info@kremwerk.com.
+ Google Calendar+ iCal Export

on September 22 | by Michael Strangeways