Comedian, Gilbert Gottfried brought his distinctive voice and raucous brand of humor to town for several shows at Parlor Live Seattle. He has used his vocal talents to voice a parrot for Disney and a duck for AFLAC. You never really know what he will do or say next. He took a few minutes out of his busy schedule to speak with us. You should really see him live this weekend. Don’t miss out! There are a few tickets left here.

Earle Dutton: Have you been to Seattle before?
Gilbert Gottfried : Yeah. I know I have but years ago. Whenever they show clips where a politician or rock star screams ‘I love you Chicago’ but they aren’t in Chicago; I totally understand.

ED: What was your worst job ever? 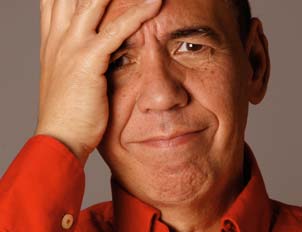 GG: Oh God, there have been so many. (Laughter) I had a couple of really awful messenger jobs. Those were really terrible. I remember one job I had working for some company that had an anti-burglary kit. As part of the kit, you were given a metal pencil to scratch your serial code into all of your valuables. So, they had me sit at a desk with a pile of the pencils and a glass ashtray. I had to scratch the ashtray with each pencil to see which ones were sharp enough. The sharp ones went into the good pile. Then there was another pile for the bad ones. They packaged up all the good ones and on the kit there was a label that said ‘Tested by Skilled Craftsmen.’ (Laughter)

ED: How do you keep your material fresh and relevant?
GG: That is something I wish I knew. Every now and then I will see a bit that I recently did on stage and think ‘Oh this goes back. This goes way back.’ It is a tough one. It is constant work to be relevant.

ED: Can you tell me a bit about your current show?
GG: I hate when people ask me about my current stuff or current show. When I say it out loud and listen to myself, I just think, ‘Gee, that doesn’t work. I am not funny at all. What is this crap?!?’

ED: Can you tell me about your new podcasts?
GG: They are called Gilbert Gottfried’s Amazing Colossal Podcasts. It is on GilbertGottfried.com. I really like to concentrate the podcasts on old showbiz, old movies, TV shows, or variety shows. At first, I didn’t think anyone would like it because most of these things are totally forgotten; but I am getting more and more messages from people telling me that they had no idea who I was talking to but they enjoyed listening anyway. I think this week I have both original Cat Women from the Batman series. I have Lee Meriwether and Julie Newmar. I have had Henry Winkler, Weird Al Yankovic, Adam West, and the guy that played Eddie Munster. I also had Danny Bonaduce. He is a great guest because he is completely uncensored. (Laughter)

ED: Do you enjoy doing the Roasts on Comedy Central?
GG: Oh yes! I really like doing those. It feels like a party when you are there. I am one of those people that do these roasts and I can make a joke about someone’s mother and their whole family dying in a fire. I think that is okay and perfectly fine but if they make fun of the shirt I am wearing, I think they have just gone too far.

ED: How did it feel when you were roasted on Last Comic Standing?
GG: Oh, it was fun! It was a weird one. I had just gotten home from being out of town. The phone rings and it is the producers of the show asking if I could fly out the next day. I basically just left everything in my bag and flew to LA the next morning. It was amazing how quickly they constructed the set and installed that giant picture of me. That was a lot of fun. I really enjoyed it.

ED: I know there are a lot of stories out there about you being fired from AFLAC but I have never quite wrapped my head around it. Can you tell me a bit about all of that?
GG: Someone sent me a really great tweet about all of that, although I forget who it was, and it really hit the nail on the head. It said ‘AFLAC fires Gilbert Gottfried after discovering he is a comedian.’ When the tsunami was taking place I did jokes about it on twitter. I always do that sort of stuff. Before that, I had done jokes about September 11th and so on. AFLAC fires me for the tsunami jokes and get loads of free publicity about it. Then, they hire a new guy to imitate my voice for less money, thus bringing closure to a horrible tragedy. I thought the whole thing was pretty ridiculous.

ED: What would you say to AFLAC if they asked you back?
GG: I would have to ask if they had developed a sense of humor since the last time. (Laughter)

ED: Could you tell me something about yourself that most people don’t know?
GG: Well, I am 6’4 and Swedish (laughter).

ED: So you look like Dolph Lundgren?
GG: (Laughter) Oh yes, we are often mistaken for each other.

ED: Do you have a message out there for youth?
GG: Oh, the whole bullying situation? There has always been bullying and that will never stop. I think it is too ingrained in people. It has gotten worse with the internet though. It used to be that they would just punch someone, take their milk money or bump into them in the hallway of the school. Now you don’t even have to go that far. You can sit at home and bully people. You just sit there and type things out. Then you are completely safe from who you are bullying. I have always said that the internet makes me sentimental for old time lynch mobs. At least with lynch mobs you had to get your shoes on, leave the house and get your hands dirty. Now you can do it all sitting in your underwear by the computer (Laughter).

Here’s Gilbert at the Joan Rivers Roast a few years back. It’s hilarious and VERY raw. If you’re uncomfortable with humor that is VERY non-PC, then you should probably not watch this.