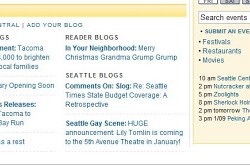 December 20, 2010 Comments Off on Dan Savage and Jane Lynch give John McCain a message in Newsweek. Views: 1651 Media Beat

Dan Savage and Jane Lynch give John McCain a message in Newsweek. Seattle’s own Dan Savage and America’s own Glee-ster Jane Lynch did a joint interview for Newsweek last week, in Los Angeles and talked about LGBTQ issues in the US. Both Mr Savage and Ms Lynch had strong words for Senator John McCain and his efforts to thwart the ending of “Don’t Ask, Don’t Tell”.

Lynch: Yeah, I say it too, to the second power.

They are so cute together…which is a bit ironic, because Dan is not a big fan of Glee, (he has said as much on The Stranger’s Slog.)

Maybe they could do a project together? Or, Dan could do a cameo on Glee…he could play one of Rachel’s gay dads! And, sing a duet with Lea Michele!

Check out the rest of the Newsweek interview with Dan and Jane, HERE.