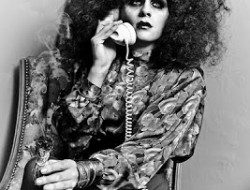 Fannie Mae Darling will be performing at the big PrideFest Kick-Off next Thursday at Lobby Bar. Photo: Kevin Kauer/Nark Magazine

One Degree Events and Seattle PrideFest are kicking off PrideFest 2011 with a special preview event on Thursday, June 2 at Lobby Bar starting at 8pm. The events of the festival, including the Big Red Parties, the Concert for Equality with BETTY, Thelma Houston and Crystal Bowersox and the Big Sunday PrideFest Event itself will be previewed and a raffle will be held with a chance to win tickets to the Red Parties and the Concert for Equality, as well as passes for the entire weekend, and t-shirts will be raffled off for the $1 per raffle ticket donation with proceeds going to Gay City Health Project.

The host will be high energy entertainer Fannie Mae Darling, up from Portland for the kick-off…which seems odd. We love Fannie Mae but why is a Portland performer hosting a Seattle PrideFest event? Is there an exchange program going on where we send Jinxx Monsoon to Portland to announce THEIR Pride schedule? Some mutual agreement negotiated in the aftermath of the Drag Queen Wars of 1998?

Regardless, pop by Lobby next Thursday to check it out…it will be a madhouse of anxious Pride Party seeking hedonists praying for warmer weather and an end to our eternal winter of discontent…