Cute. Widdle Darren Criss from “Glee” and every Red Carpet on the planet apparently needs a hole to plug. It’s his birfday today (he’s a whopping 25 years young) so we wish him the best. We also wish that he never sings Michael Jackson songs in public again…didja see last week’s AWFUL Michael Jackson episode of  “Glee”? Even a lot of “Glee” fans had doubts about that turkey of an episode. That show has basically turned into “Saved by the Bell” with musical numbers and homos.

And, I chickened out from posting the photo of Mr. Criss I REALLY wanted to post…

1) It was an extremely pornographic fake photo and not appropriate for the website.

But, we also realize SOME of you enjoy EXTREMELY pornographic fake photos of celebrities…Here’s the VERY NSFW link to the photo in all its fake sploogey glory. You have been warned. Really. It’s filthy. NOT kidding.

Finally, a sincere big fat Happy Birfday to Mr. Criss. He is adorable.

As long as he never sings a Michael Jackson song. 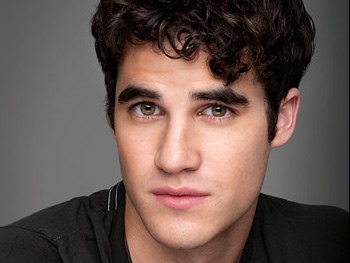