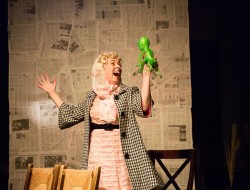 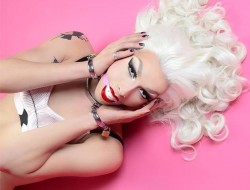 Actor Euan Morton, pictured here in his Tony Award nominated role in the Boy George musical “Taboo” in 2003, will take on the lead role in the national tour of “Hedwig & The Angry Inch” starting in November 2016.

There’s a new Hedwig coming to town…and, it’s not Jinkx Monsoon reprising one of her signature roles. Nor is it “Glee” star Darren Criss, currently appearing in the role in San Francisco and Los Angeles.

The new cast for the national tour of the acclaimed and much beloved queer rock musical, Hedwig & The Angry Inch was released today and while we’re getting a Tony Award nominated actor in the role, we’re kind of disappointed we’re not getting our hometown “Hedwig” superstar…or, even a “Glee” has-been.

John Cameron Mitchell and Stephen Trask’s off beat fable about an East German boy who undergoes a botched sex change in order to escape to the west became a hugely successful off-Broadway hit in 1998 and was followed by a cult film, directed by writer/star Mitchell in 2001. “Hedwig” finally made it to Broadway in 2014 in a highly acclaimed production that won 4 Tony Awards including Best Revival/Musical and Best Actor in a Musical for star Neil Patrick Harris. The national tour for “Hedwig” began earlier this fall in San Francisco with Darren Criss reprising the role he also played on Broadway, following turns by Harris, Andrew Rannells, Michael C. Hall and original star Mitchell. But, Criss is apparently too busy for the entire tour (really? Darren Criss?) so following San Francisco and Los Angeles the role will now be played by Tony nominated actor Euan Morton, best known as the lead in Taboo, the 2003 floppo musical about Boy George, and as the father of cute/annoying child theater critic Iain Armitage.

There have been rumors (I hear things…) that Seattle’s own Jinkx Monsoon, the superstar drag queen and winner of Season 5 of “RuPaul’s Drag Race”, aka actor Jerick Hoffer had auditioned for the role. Monsoon/Hoffer would have been a great fit in the part…he’s the correct age and he’s already played Hedwig in a highly acclaimed 2013 production at The Moore Theatre in Seattle. And, we could argue that he’s actually a better known star than Mr. Morton, at least in the LGBTQ community. But, oh well…why not have a hetero Brit play Hedwig? We’re sure he’ll be fine.

Just not as good as Jinkx…

Morton takes over the role on November 29, 2016 for the San Diego stand of the tour along with Hannah Corneau taking over the role of Yitzhak currently played by Lena Hall, who also won a Tony for the Broadway revival. The tour comes to Seattle Theatre Group’s Paramount Theatre for a December 13 through 18, 2016 run. Pre-sale tickets are on sale this week for this run; go HERE to snatch them. You’ll need to use promotional code ” MIDNIGHT ” when prompted.