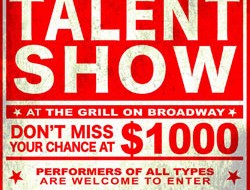 OK, we're hoping these ghostly douchebags aren't coming to the new Q because it would be a waste of an awesome space... Image: Bohlin Cywinski Jackson

While much of Capitol Hill and specifically the LGBTQ night lifers on it have been talking about the long delayed opening of The Social over on East Olive for the last year, another new venue has been quietly but persistently chugging along under the radar.  The team behind “Q” at 1426 Broadway, a few feet from the Broadway intersection at Pike Street, have maintained a relatively low profile as they secured the location, backing and enlisted an impressive team of designers to create the new mega night club and lounge.

The space is designed by Bohlin Cywinski Jackson, the AIA award-winning architects behind such projects as the iconic Apple Cube on New York’s Fifth Avenue, Pixar Studios Headquarters, and Seattle City Hall, to name a few.

In addition, Q will incorporate world-class audio-visual components as part of its overall design, providing the most memorable experience for our patrons possible. These include a sound system by Funktion One from England that’s been designed by Sound Investment AV, and state of the art lighting design by Steve Lieberman of the award-winning SJ Lighting in Los Angeles.

Q partner Scott Smith is the go to man for any and all info about the new venue and we finally got tired of reading updates from Mr. Smith in the Capitol Hill Seattle blog and decided it was about time we had a little chat with him for ourselves to find out the nitty and the gritty about a venue that has the potential to change the face of nightlife on the Hill. Last Saturday afternoon we paid a visit to the Q and Scott Smith gave us a personal tour of the 12,000 square foot space; it was a busy day for Smith. At the crack of dawn that day, cranes arrived to lift the HVAC units on to the roof. Inside, most of the rough construction is completed with new interior walls and levels in place; all the bare bones of the club are now apparent and we got a strong sense of what the venue will ultimately look like…

And, based on what we saw, it will blow your minds.

Now, we should be fair. They ain’t done. There are a lot of things still to be done and maybe they’ll botch something and the club will be horrible. Ugly decor; poor traffic flow; snotty staff; high drink prices; odd entertainment choices–they could all derail the potential awesomeness of the space. But, right now, looking at the layout of the Q space is comparable to meeting a really amazing 13 year old kid who’s smart and articulate and well mannered and ambitious and polite and obviously raised by great parents. That awesome kid has HUGE potential to be an amazing adult, and very likely will be, but you never know…poor choices have derailed the expectations for many promising young stars. Q seems to be on track to become the class valedictorian and not voted “Most Likely to Rob a Convenience Store”.

The Q Team made some wise choices when it came to design; the space is impressively laid out. You enter the front doors  to immediately encounter a long and winding hallway to the rear of the club; Scott Smith explained that they wanted to keep customers off the street, a sensible choice in a city with 300 days of drizzle and mist a year. The hallway is also an exciting introduction to the club; it’s the Yellow Brick Road to Oz. It builds excitement and expectation. A view of the entrance/bar from the mezzanine at the Q under construction. Photo: Les Sterling/SGS

The hallway leads to the rear of the space and you enter the club proper to encounter the enormous main bar with a coat check to the immediate right. The bar is a huge oval that centers the space it occupies and serves as a focal point to unite the area between the door and the large dance floor that sits centered in the middle of the club. It should also help with traffic flow. Guests will enter, have the immediate option of a coat check, which is tucked away discreetly to the right, then can proceed to a drink order. The bar doesn’t impede on the dance floor, to prevent back up and congestion. Around the dance floor are seating and viewing area with raised platforms for optimum people watching or impromptu bursts of go go dancing for those inclined. Back towards the front of the building at the far end of the dance floor, will be the DJ booth that anchors that end of the building. It’s all designed to maintain an even flow of traffic throughout the entire space.

The designers have also wisely created different spaces for those who might desire a different nightlife experience. A second bar area at the front of the building near the DJ booth is the cozy Bourbon/Whiskey Bar for those seeking a more intimate space to talk with friends, (or make new ones), and it’s signature feature will be a dazzling array of whiskeys including specially created ones for the Q. The Bourbon/Whiskey Bar is one of Smith’s favorite features of the club; he’s a native of Kentucky and bourbon flows through his veins…well, at least metaphorically. A back hallway leading from the Whiskey Bar helps create more circulation and leads to the bathrooms (more on that in a moment) and an impressive full storied stairwell that takes you to an upper mezzanine level that overlooks the main bar and dance area, and another opportunity for people watching, or to be viewed and admired for those narcissistically  inclined.

As for the bathrooms…they are HAWT! There is a separate Ladies Room, but the main bathroom is huge and designed as a Unisex space…EVERYONE is welcome! Q had to fight hard for this space; city zoning frowns on unisex restrooms but the Q was able to make enough changes to get it up to spec. It’s a large, Sex and the City/NYC hip club type of powder room and it’s going to be very popular. A family of 4 could live in the unisex bathroom stalls at Q....Photo: Les Sterling/SGS

Q is on track for its opening on September 8th with DJ and record producer Little Rock and the legendary Quentin Harris on hand and more guests/performers to be announced in the coming months. Q plans on bringing in big national names for both dj and performing duties, as well as local talent as well, and there WILL be drag performers.

What all this means is that Seattle/Capitol Hill seems to be heading to have an impressive, well designed, well funded and well managed entertainment mecca. If other area clubs don’t try to compete, someone is likely to get left holding the bag and it ain’t gonna be a bag full of money. Q could end up being too straight and East Side-ish to appeal to the LGBTQ community, but Scott Smith and the Q Team seem to be canny enough to realize they have to cater to a highly diverse crowd of people in order to thrive. It all remains to be seen, but Q, unlike other venues that have made similar claims, seems to have what it takes to become Power Players in the Seattle and Capitol Hill nightlife scene.

It’s going to be a very interesting fall/winter this year to see how it all turns out.

MUCH more as it develops.

Correction note: The new club is named simply “Q” and NOT “Q Ultra Lounge” and has been corrected as such in the post.