Not surprisingly, a Catholic priest offers some dim advice to a confused teen…Allen Fitzpatrick as Friar Laurence and Quinn Franzen as Romeo in the Intiman Festival’s “Romeo & Juliet”. Photo: Chris Bennion/Intiman

Friday night at the after party for opening night of the Intiman Festival’s production of “Romeo & Juliet” I was introduced to managing director Keri Kellerman and we had a lovely discussion about Intiman’s “rise from the ashes” and the opening weekend for their summer festival which featured all four plays opening on successive nights from Wednesday to Saturday. She asked what I thought about this scheduling and I rather bluntly told her:

“Uh, most of the theater critics HATE it…it’s a pain in the ass to come to Seattle Center FOUR nights in a row to see FOUR openings. AND, it’s quite a lot of work to write reviews for FOUR major openings, back to back. Plus, it’s a waste of publicity…if you broke it up into two openings one weekend, and two the next, you’d get two weeks of press instead of one!”

I said it NICELY! (I’m the epitome of niceness at all times…that’s just my nature.) And, she said she appreciated the feedback….and, I believed her. The NEW Intiman is very much a new company in every sense of the word and while the name “Intiman” has a history and a tradition, the mostly very young theater artists behind the new Intiman are in fact creating a new company and a new way of doing things…and learning along the way. That was evident in how they raised the money for this Festival, boldly using video and social media to get the word out that in order for Intiman to survive, it needed new streams of revenue…and, new audiences to fund that revenue and support the growth of the company. The announced season for this festival: classic Shakespeare; Ibsen; a small contemporary work and a crazy, Re-bar style drag farce made it clear that the kids at Intiman were courting the old season ticket holders AND reaching out to younger audiences who traditionally don’t flock to the old school regional theaters. It was a season clearly designed to attract the greatest number of people in a short period of time, a probable necessity for the future success of Intiman. But, it takes great productions to lure people in for a seven week season played in repertory and a combination of poor reviews and deadly word of mouth via social networking could nip the hopes of Intiman right in its very fragile little bud.

But, after seeing all three of the mainstage plays this weekend: Shakespeare’s “Romeo & Juliet” on Friday night; Ibsen’s “Hedda Gabler” on Saturday afternoon, and the premiere of Dan Savage’s drag fandango, “Miracle!” on Saturday night, I can safely say that Intiman’s little bud deserves to blossom and grow and return for another season. None of the productions are perfect and there’s room for improvement for the company and the festival, but the premiere Intiman Festival is largely successful and to be applauded if only for its daring in bringing back a true repertory format and doing older works in novel ways and staging new works that aren’t your typical big stage fare. There are brave and interesting choices being made by the four directors, the designers and the acting company of 17 and not every choice works, but the attempts are admirable and when they work, they really work and when they don’t work…well, they move on to the next scene or the next play being performed. There’s a lot to sample in Intiman Festival 2012 and there’s a lot to discuss and it runs the gamut from the brilliant to the mundane and it’s all open to interpretation…and, hopefully some lively discussion.

We’ll start that discussion with Allison Narver’s staging of “Romeo & Juliet” the very frequently produced Shakespearean chestnut about star crossed lovers in old Verona. We all know this story by heart (who hasn’t seen “West Side Story”?) and as a result, such familiar territory means that many productions of “R & J” are dull, trite and sappier than a tree in Vermont. But, Ms Narver avoids all the pitfalls of the material and manages to bring a fresh spin and energy to the story with a theatrical setting that’s ambiguously modern to the point of being post-modern. The costumes and set are vaguely contemporary but also suggest a society that might have recently collapsed and been reborn as a dystopic city-state under a new religious and political regime. The casual summer-y separates worn by the younger characters are contrasted with the more formal wear of their elders and the servants who wait on them, with family trees of kinship printed on many of the articles of clothing. There’s an odd sense of something not quite right in Ms Narver’s version of Verona, of a society that’s been fractured and rigidly reformed, but at a great cost. The tensions between the Capulets and the Montagues seem to bleed into all aspects of this society…and, it’s a society that’s slightly reminiscent of the one in Margaret Atwood’s novel, “The Handmaid’s Tale”. The rot at the center of this society is brought out in the open with the tragic affair of Romeo and his Juliet.

There’s much to admire in the director’s take and tonal quality with this material and it’s all enhanced by the gritty set design of Jennifer Zeyl which utilizes barbed wire, metallic garage doors and hard surfaces contrasted with flowing fabrics to depict the various sides of  this fractured Verona. (The basic layout of Ms Zeyl’s design is used for all three mainstage productions but manages to change greatly with other design elements for each production.) L.B. Morse’s lighting design and Matt Starritt’s sound work are also suitably gritty and urban and all the design elements work well within this visual and aural aesthetic. I made much mention of Deb Trout’s interesting costumes previously; they work well within the design parameters of the production and the fabric choices are terrific…but the printed on family trees on the clothing are a bit muddy and hard to decipher to the point where they become distracting. (It seemed like it might have been one of those cases where a design choice was brilliant on paper, but in execution it doesn’t really work as well as originally hoped.)

The mood and tone and atmosphere of this production were all interesting and compelling but in the end, it’s always about the performances and Intiman’s “Romeo & Juliet” has some terrific ones…and, some not so terrific ones…and, some performances that are too good in relation to the size of the roles being portrayed and in contrast with some of the other performances. It’s a not uncommon occurrence in repertory theater but it’s especially pronounced in this production. The two most compelling performances in “R&J” you would hope would belong to the actors PLAYING Romeo and Juliet but that’s not the case here and you know you have a few problems when it becomes apparent that if the title of the play was based on performances, then this production should be called “Lord Capulet and Mercutio” and the “fault” lies squarely on the shoulders of the actors playing those roles.

Mercutio is a pivotal role in “R & J” and a difficult one, but Michael Place’s breathtaking performance is so good and so vibrant and so energetic that he becomes the center of attention every time he steps on stage. And, the production has such a significant energy drop after his character dies that it never entirely manages to recover. Mr. Place has that rare American gift of making Shakespeare sound alive and contemporary and natural; so many actors struggle with Shakespeare and always sound stilted and rush through their lines just to get them out. His Mercutio is a big performance but it always feels REAL and contemporary. It’s the best Shakespearean performance I’ve seen in Seattle since Darragh Kennan’s work in “Hamlet” two years ago.

He’s matched by Timothy McCuen Piggee’s work as Lord Capulet, Juliet’s proud patrician father. Lord Capulet is not really a major role in this play; (how many times has the actor who played this role been robustly mentioned in a theater review?) but the actor is such a commanding, powerful presence is his few scenes that you look forward to his every entrance. His sternness and strength are superbly contrasted by his grief and anguish at Juliet’s death (or to be accurate, multiple deaths).  Carol Roscoe as Lady Capulet is also equally powerful and poignant and both actors bring huge amounts of energy and excitement to their scenes.

But, that’s not always well matched with many of the other performances which range from competent, to out of their depth to over the top. Quinn Franzen is fine as Romeo, appropriately passionate, callow and charming and he does a fine job in the role. It’s a good performance from a terrifically promising young actor. There’s also fine work from Burton Curtis as a comic servant, and Hannah Victoria Franklin as a ambiguously gendered Prince and Shellie Shulkin’s Lady Montague and Shawn Law’s contrasting roles of Tybalt and Paris, (though frankly, it seems a bit gimmicky to have the same actor play these two roles…it’s a little heavy on the cutesy casting for my taste.) The great Seattle actor Allen Fitzpatrick also does double duty as Lord Montague and more importantly, Friar Laurence and he’s not unexpectedly fine in both roles, though his Friar Laurence seems a bit vaguer than usually portrayed, but since the good Friar is, at heart, a bit of boob it’s not that radical of a performance choice.

Finally, we come to the  Nurse and our Juliet and it’s sadly a case of a bit too much of a good thing, and not quite enough. Marya Sea Kaminski is one of Seattle’s most beloved actors and she’s known for playing roles with great passion, but her Nurse is about 15% too far over the top. The Nurse is supposed to be a comic but Ms Kaminsky takes it to the point where it starts to edge into Carol Burnett mugging it up in a Bob Mackie gown and false teeth territory and while I adore Carol Burnett mugging it up in Bob Mackie costumes and fake teeth (or tits) it’s a case of bit too much and bit too broad. And, on the other side of the coin, the adorable Fawn Ledesma is attractive and appropriately coltish as Juliet but she’s also not entirely comfortable or believable with the language. The last third of the play Juliet takes center stage and Ms Ledesma doesn’t  vocally or emotionally have the power to command those scenes and the earlier raw power generated by the production and the stronger performances, quickly dissipates and frankly, by the end of the night you’re not entirely sad that the young lovers are dead.

In the end, Intiman’s “Romeo & Juliet” is a mixed bag of ideas and performances and directorial and design choices that work very well…and, a few that do not. The good and the very good override the not as good and “R & J” is recommended for fans of challenging and thought provoking theater and worthy of serious attention and discussion. It’s a piece of work that the new Intiman can call its own. 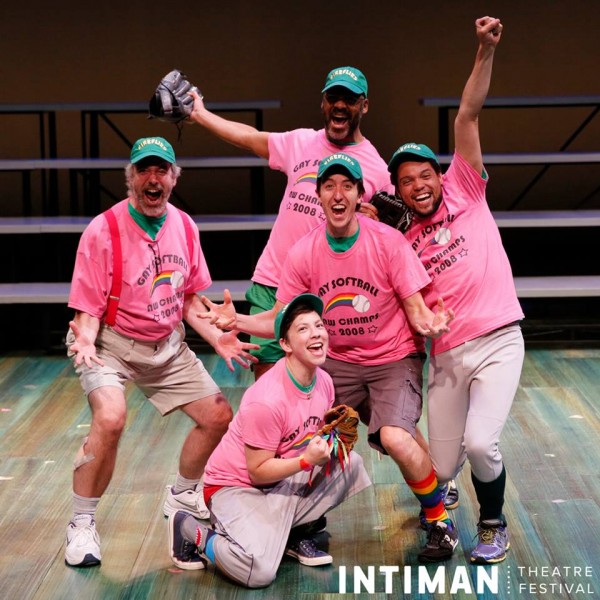 Two new theatrical works are opening in Seattle tonight….one of

...
Previous: Hey there Tacoma! How was your Pride? Next: SGS Turns 5! Come celebrate with us!