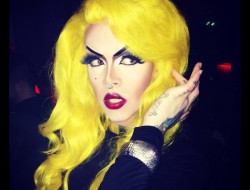 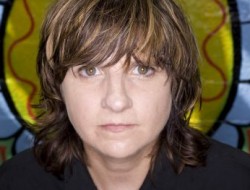 The adorable TEXAS was the star of the Stoli Guy Seattle Pageant last Friday, Aug 15 at Neighbours. Photo: Tim Harmon.

The big hootenanny known as the “Stoli Guy Pageant” happened last Friday night at Neighbours Nightclub and a lusty crowd of booze hounds were on hand to cheer on the five contestants who were competing to win the “Stoli Guy Seattle” title and a chance to win $10k for the national title in New York next month. The blatant promotional party for Stolichnaya Vodka and GayCities was a big success as copious amounts of Stoli vodka was consumed and copious amounts of Stoli swag was copped by the thirsty hoards.

Mama Tits hosted alongside national Stoli host Patrik Gallineaux. The superb judging was done by Mr. Michael “Me” Strangeways. The mediocre “let’s give everyone a ’10’!!!!!” style of judging was the work of Lobby Bar owner Paul Villa and “High Maintenance Bitch” entrepreneur Lori Pacchiano and her adorable bulldog, Texas.

The dance stylings of Sean C. won him the title of Stoli Guy Seattle with John C. and his opera aria a VERY close runner-up. Congrats to ALL the dreamy participants!

You can vote for the national “Stoli Guy” winner starting on September 2.