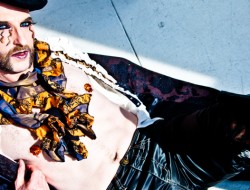 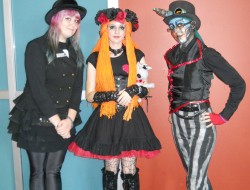 Next Weekend’s “Steamposium” To Heat Up Seattle With “Firefly” Stars Out gay actor and one fo the stars of the beloved cult tv series “Firefly”, Sean Maher will be a special guest at Seattle’s premiere steampunk convention, STEAMPOSIUM, Sept 26-28, 2014.

Grab your pocketwatch, tighten that corset, and slap on the utility belt! It’s Steamposium, a new kind of convention for the Victorian at heart.

We don’t need to tell Seattle-ites why Sci-Fi is one of the best genres out there. It’s all-inclusive, allows us to dream, and in most of it there’s no such thing as prejudice (don’t talk to me about Ender’s Game). In the subgenre of Steampunk, we get to perpetually travel back in time, to an alternate history of sorts.

The realm has gained in popularity over recent years (a friend of mine actually had a steampunk wedding that turned out fabulously), leading to Seattle’s own Steamposium, rising from the ashes of Steamcon. Because we’re nerds/geeks! And we need conventions to talk about it! Otherwise we just won’t be social enough.

It’ll be the weekend of September 26th-28th, because Steampunk brown goes perfectly with autumn colors. There’s a little something for everyone, as every good convention should have. Held at the Bell Harber International Conference Center downtown on the waterfront, (2211 Alaskan Way), there will be eye candy. Effing Sean Maher (Dr. Simon) and Jewel Staite (Kaylee) of Firefly/Serenity fame will be special celeb guests on Saturday and Sunday! *Quietly dies of shock.* Folks, you know you can’t wait till another ECCC to see those two.

Friday night is to feature “Steam Dreams: A Dinner Cabaret Experience,” for one night only. Spectacular show you’d never get at Teatro Zinzanni. If that isn’t enough, the Birthday Ball is the same night, complete with music and free cake. Costume contest follows on Saturday, the 27th, morning (providing you didn’t wear it out Friday night), with Sean Maher judging the “Browncoat” division (aka Firefly). For those who desire a proper Victorian tea time, two High Teas will be offered both Saturday and Sunday, featuring talented artists and designers with a fashion show. (This looks like the equivalent of ComicCon panels, only, yanno…steampunky.)

And then…and THEN, on the night of the 27th…the burlesque show, “Shake That Brass.” Featuring Seattle’s own Diva le Déviant (Sinner Saint Burlesque) and Waxie Moon (of “boylesque” fame)! Glamour and gender-bending at its finest! Vienna LaRouge and Shanghai Pearl of our fair city will also entice and entrance, among others. All this fun, coupled with a bevvy of authors, artists, designers, vendors, and general steampunkish awesomeness, await you.

Have I mentioned that androgynous lesbians look awesome in Victorian suits? And that there aren’t nearly enough nerdy queens who show up to conventions? Go already! How often do you get to break out your brown leather? I, for one, will be buying entirely too many corsets and gloves.