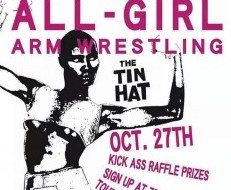 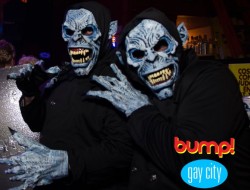 Bump, Purr and The Baltic Room All Offer The...

October 30, 2014 Comments Off on Lady Bunny Is Hopping To Bump Into You This Evening…(At Bump!) Views: 1645 Arts & Entertainment, Drag, Nightlife, We Love The Nightlife

Lady Bunny Is Hopping To Bump Into You This Evening…(At Bump!) The Lady Bunny, Up Close and RAAAAAL Personal….and, in Seattle tonight for BUMP!

The Divine Diva Known As Lady Bunny is heading to Seattle for BUMP! Gay City’s annual Halloween party and fundraiser which is happening TONIGHT at Neighbours with BenDeLaCreme, The Markos Sisters, Superthreat and Jimi Jaxon. Grab tickets here or at door! Meanwhile, check out our interview with the always opinionated Lady B!

ED: Are you excited about coming to Seattle?

LB: I am! In fact, I am coming a day early to spend time with my dear friend Dina Martina. I worship Pike Place Market (laughter). I don’t know why, but my family is obsessed with the weird berries and jams they sell there. We don’t get Marion berries here. You don’t get those just anywhere. I end up loading up on gifts with your bizarre berry jams. I tell you, nothing tickles my family more than odd jams. The strawberries at that market are the size of apples. The seafood is just incredible. Maybe I will pack an extra girdle! I won’t be able to get in to the one I have now.

ED: Have you performed with Ben De La Crème before?

LB: No, I have not. I got to hang out with Ben and Jinkx Monsoon in Provincetown this past summer.

ED: How did you decide to become a DJ?

LB: Well actually, Michael Alig gave me my start. You know Michael, the Club Kid axe murderer. I think what happened was that during the Club Kid craze the Techno became so hard hitting. I call it Pots and Pans. It was so progressive that it had almost progressed beyond music. It was really hard. It was drug music, basically. They would often hire me in a smaller room to play older stuff, R&B, or stuff that was just more musical. So that’s really how I got my start. I love to dance and kind of wanted to control the music. I always knew the party would be better as a result. I never really saw myself as a Dj but it has become a side career. People tend to hire me bit because I am the best mixer but because I bop around and clown around. It really helps if I like the music.

ED: What other projects have you been working on?

LB: Well, I do write music and sing. I have a new single out on iTunes called “Lately”. I wrote it and perform it with the Groove Addix. It is on a small label so it is not breaking any charts yet. RuPaul tweeted that he bought it. Dragaholic News said that it may be the best Dance single of the year. I think we are putting another set of remixes out in December. It is an ongoing process. It is off the charts as Dina Martina would say, as in hasn’t gotten on the charts.

ED: Are you planning on making a video for “Lately”?

LB: Yes, we just haven’t gotten around to it yet. It is a sassy song and a little bit dirty. It is not as dirty as my comedy. It is a serious Dance song though. The Groove Addix are a New York producer duo and they have had a couple of underground hits. It is a clubby thing.

ED: Can you believe it has been 20 years since Wigstock the movie?

LB: That festival really took a lot out of me. It got to the point where my therapist would say ‘You’re not doing that again. I see how crazy that makes you.’ So, I would take a few months off of therapy to do the festival then go back in double time. It was a great fun time in New York City. We had a 20 year run so if we take 20 years off so be it. There is talk of possibly doing a Musical on Broadway. We may even revisit the idea of doing a reunion festival but it did control our lives for two decades. I loved it but I have moved on to other things, like Dance records that are off the charts (laughter).

ED: How did you come up with the name of persona of Lady Bunny?

LB: Well you know, there was a comic book called “Millie the Model” that was fairly popular about two models. Then there was an off-shoot of that called “Bunny ‘Queen of the In-Crowd’. She wore psychedelic mini dresses and had blonde hair. Of course, this was the late sixties so it was quite like my look now but thin because she was a model. I did collect those comic books so that could have been it. There wasn’t any rational process. ‘Lady’ is a name that a lot of drag queens down south give themselves to try to seem as though they are classier. So I was kind of making fun of that tradition to seem grander than you are because when I got my start with RuPaul in Atlanta we were dirt poor. Our outfits were so atrocious. And don’t even get me started on our make-up skills. The idea of using ‘Lady’ anything was a joke in itself. We were the most busted boogers on the block (cough cough) of the city perhaps.

ED: What prompted you to move to New York?

LB: Well, my parents once sent me to Europe as a teen. It was a really mixed up ticket, to say the least. They had to fly me from Chattanooga to New York. My parents, well I won’t say cheap but shall we say frugal. They didn’t want me to take cabs. They had mapped out this convoluted impossible to read trip through the New York subways. I saw a black queen who looked semi homeless just dressed as a man pretty much but with a feather headdress on. Just like you know, not bothered. I just thought ‘I need to be here.” I just made a mental note. I knew I was tired of rednecks. You know just like anyone growing up that has big dreams of bigger opportunities there aren’t many in small towns. Chattanooga is a city but it is not known for its thriving art community (laughter). Two men can get married there as long as they are first cousins (laughter).

ED: What is the most interesting place you have been in your career?

LB: Marrakesh is one of the most interesting for sure. Even out of drag I have blond hair and I am quite obviously effeminate. You should have seen the women’s eye glaring at me through those veils. They knew that somebody was going to be getting it on with their husbands and sons (laughter). It was a fascinating experience for many reasons. One of them being that it is a totally different culture from ours. A lot of Americans kind of stay put where they are from and maybe go on vacation to another state. A lot of Americans will also go to another country and order hamburgers not really having much of a local experience. Hey, it is your vacation; you earned it and do whatever you want. I like to hear different languages and get a better perspective. I mean we went to Africa for a year when I was growing up and it really opened my eyes. I am very grateful that my parents instilled in me the importance of looking at things from different perspectives.

LB: Oh yes! We often grow up with some very negative influences. By the time we figure out that we are LGBT we have been told by society and the church that what we are is intrinsically bad or sinful. Our parents may not understand it and feel like our being LGBT is a result of some failure on their part to properly parent us. This is why a lot of LGBT people go on to find their own families because some families never completely understand. I think it is really important to have a strong sense of purpose. If you feel that you are Gay, Bi or Trans it is going to be a little bit more of a difficult journey than someone who has a sexuality which is more mainstream or in the majority. You have got to be a little bit stronger. There are places to get help. It is really difficult to separate these negative messages. You really have to identify the negative influences and realize that they could be coming from someone you love and trust like your parents or your church. It does get better when you find your own community. Sometimes that is not easy to do. People don’t like it when I say this but I believe that the church probably is one of the biggest enemies of LGBT people living freely and openly.