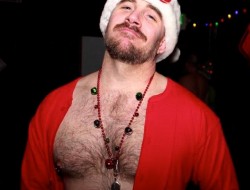 The Fourth Annual ‘March of the Mistletomosexuals’ is Upon... 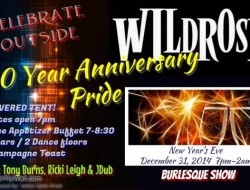 The Wildrose Moves Outdoors For Its Huge Street/NYE/30th Anniversary...

December 18, 2014 Comments Off on Thursday Club Wars: It’s The Last “Revolution”…Plus, Is HollaBack Snatching Their Spot? Views: 2148 Nightlife, We Love The Nightlife The HollaBack Midnight Revue Gals….are they moving to The Baltic Room next month?

Since we had a hand in making Thursday nights a fun, nightlife option, (yes, we’ll take some credit in the success of ElektroPop! At The Baltic Room three years ago…we promoted the shit out of that party which helped make Thursdays on Capitol Hill a viable party night after years of dormancy….) we have a vested interest in “Thor’s Day”.

The big poo is that tonight, Thursday, December 18, 2014 is the FINAL “Revolution” at The Baltic Room. The DonnaTella Howe hosted and Ramar Larkin Jones produced dance-y/drag-y party is closing up shop…for undisclosed reasons. The event has gone through several changes over the course of its year and a half existence. Olivia LaGarce and Kitty Kitty Bang Bang were co-hosts who have come and gone, and Seattle’s Uber Party Promoter/King of The Club Twinks, Alex Garcia helped create the night but then moved on due to conflicts with his big boy job.

Meanwhile, the Buzz we’re hearing is that Sinfinite Events (aka Arden Turnbull & Jimmy Scarpello) will be moving their “HollaBack” dance-y/drag-y Thursday night event at Neighbours, DOWN to The Baltic Room at the first of the year, thereby replacing “Revolution” which in turn replaced the Sinfinite produced “ElektroPop!”

We’re not sure if it will continue to even be called “HollaBack” or feature pop music from “The Turn of the Century” or host Isaac Scott, but we’ll see…you could pop by Neighbours tonight to find out as they also stage their FINAL “HollaBack”. Here’s some more dirt on tonight’s event:

HollaBack Thursdays Features:
–> CHEAPEST DRINKS ON THE HILL – $4 DOUBLE WELLS
–> FREE COVER BEFORE 10PM
–> OPEN AFTERHOURS WITH DANCING UNTIL 3AM

After 8 months….over 200 hours of #ThrowbackJams from DJ Bret Law…1,000’s of guests shakin’ their booty on our dance floor, and over 35 AMAZING drag shows featuring some of Seattle’s HOTTEST talent….it all comes down to THIS THURSDAY! Our FINAL SHOW at Neighbours Nightclub! Come celebrate with us and stay tuned for some EXCITING announcements we have coming soon about the launch of a brand new adventure!

HollaBack Thursdays is a 21+ Event