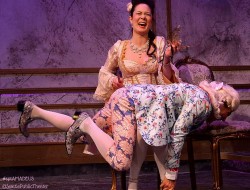 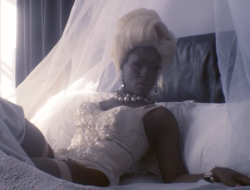 Seattle Theaterland Review: The 5th Avenue’s “How To Succeed…” Is A Candy Colored Comedy Delight J. Pierrepont Finch (Eric Ankrim) and company in How to Succeed in Business Without Really Trying at The 5th Avenue Theatre.
Photo Credit Tracy Martin

How many ways can I express my love for the 5th Avenue Theatre’s deliciously delightful production of the classic musical comedy, How To Succeed In Business Without Really Trying? Should I send valentines? Bon bons? Silk stockings and Hershey bars? A lovely pineapple? It’s a pure candy colored bon bon of a show…a sweet but tangy treat with a lotta kick to it. It’s a big fat hit and the best show the 5th Avenue’s produced in years.

But, to be fair, they ARE working with exceptional material. There’s a reason “How To Succeed…” has been packing theaters for the last 50 years…it’s a smart, funny show with terrific songs by Frank Loesser and a Pulitzer Prize/Tony Award winning book from Abe Burrows, Jack Weinstock and Willie Gilbert that’s actually based on a real self-help of the same name by Shepherd Mead. The satirical wit of the book and Loesser’s charming songs are as fresh today as they were in 1961. It’s the rare “Golden Age of Broadway Musicals” show that holds up well; its zippy pace and razor sharp dialogue are a main reason this show is one of those “hard to muck up” shows. You get the right cast in place and you have a musical comedy gold.

And, this show does have the right cast in the right place. I’ve kvetched about the 5th Avenue and their sometimes odd and clunky casting (cough…”Sound of Music”….cough) but with “How To Succeed…” they’ve perfectly cast every role in this show with superb actors. Eric Ankrim is so obviously the perfect Seattle actor to play the lead, J. Pierrepont Finch, the go-getter window cleaner who climbs his way up the corporate ladder at the “World Wide Wicket Company” with the help of a certain self-help book. He’s the perfect comedic song and dance man for this role and he’s a delight to behold.

And, he’s backed up by a brilliant company of actors. There are so many terrific performances including leading lady Sarah Rose Davis as the sweetly determined Rosemary, who’s just as determined to snatch the heart of Finch, as Finch is determined to get to the top of the corporate dog pile. She’s aided and abetted by the always reliable comedic charms of Sarah Rudinoff as Smitty, everyone’s favorite go to gal in the office, Allen Fitzpatrick as the befuddled boss Mr. Biggley and Jeff Steitzer as Bert Bratt, a VP at World Wide Wickets. These seasoned Seattle veterans all give superb comedy performances. But, the biggest crowd pleasing treats would have to be Jessica Skerritt’s deliciously vapid take on the office sex bomb, Hedy LaRue and Adam Standley as the boss’s sycophantic nephew and Finch’s chief rival, the toady Bud Frump. Ms Skerritt has played a couple dingy blonde characters before (Ulla in “The Producers” and Audrey in “Little Shop of Horrors”) but she takes the tarty Hedy to the highest levels of delicious delight…she does very odd thing with the words that come out of Hedy’s mouth that have to be heard to be believed. She’s taken a fun character role and added some inventive layers of pure joy.

Meanwhile, dark horse Adam Standley who’s been toiling away in increasingly larger roles over the last couple years as HE climbs the ladder of local theater success has apparently been keeping it a secret that a song and dance man lurks within the recesses of his talent. He demonstrated a bit of that in last fall’s production of Mr. Burns, a post-electric play at ACT where he had to channel a singing/dancing version of The Simpsons‘ villain in an odd, post apocalyptic musical of the future. Here, Mr. Standley truly unleashes his inner Joel Grey/Ray Bolger as he demonstrates he’s not only a talented comedic/dramatic actor but he has fine strong singing voice and a delightfully light step when it comes to choreography. It now sort of behooves the 5th Avenue to find more musical theater roles for Mr. Standley to portray in the future.

And, beyond the superb main cast and ensemble, the rest of the show is a visual treat as well. Obviously the op-art, geometric print designs of 60s modernistic artist Piet Mondrian are the focal point of the design aesthetic for this production, with Tom Sturge and David Sumner’s set design strongly reflecting the look of Mondrian as well as Robert J. Aguilar’s lighting and Rose Pederson’s vividly bright costumes. (Yves Saint Laurent’s famous Mondrian print dresses are directly “knocked off” here to great comic effect in the number “Paris Original”). This show looks and sounds like a million bucks.

Finally, shout outs to Bob Richard’s witty choreography with numerous homages to the original choreography mostly created by Bob Fosse…I especially like Mr. Richard slyly referencing some Fosse moves from that OTHER fantastic 60s New York City “mod” musical Sweet Charity and the “Rich Man’s Frug” number. If you’re familiar with that number in that show (go watch the YouTube clip!) you’ll know what I mean…

AND, Bill Berry has done a terrific job of staging this show. There are a lot of clever bits in this production that are NOT a part of the script…including a sly impersonation of our current president by one of the actors in the show. I was lucky enough to have seen the 1995 Broadway revival with Matthew Broderick, and this production at the 5th Avenue is just as fine as that production, if not better in many ways.  Mr. Berry has proven he has a knack for staging these kinds of musical comedies.

BUT, I do have one kvetch…the 5th Avenue REALLY needs to crack down on the late comers coming back for the 2nd act. At last night’s opening night performance, at least 40 inconsiderate intermission drinkers came stumbling back to their seats 5 and 10 minutes into the second act. Not only is it visually distracting and obnoxious to fellow patrons, it’s also rude and distracting for the actors on stage. Now I get that the 5th makes $$$ selling over priced drinks to idiots who can’t wait an hour to go out and have REAL drinks in a bar, but it’s inexcusable to have that many people stumbling to their seats that late into the act. They were all apologetic and sheepish about it, but it still doesn’t excuse their rude behavior. Either clear out your bar in a timely matter, or refuse to re-seat these scofflaws…it’s that simple.

Tags: How To Succeed In Business Without Really Trying, The 5th Avenue Theatre