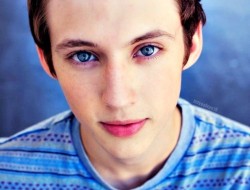 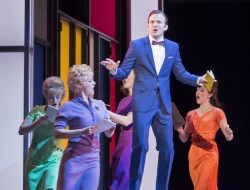 So many British plays on hand on Seattle stages right now…one kinda old and one kinda new.

The “old” one isn’t THAT old…though, structurally, it’s very much of its time. It’s Peter Shaffer’s justly acclaimed 1979 play, Amadeus, his clever take on the life of legendary composer Wolfgang Amadeus Mozart and his supposed rivalry with fellow composer, Antonio Salieri. Told through the eyes of the embittered Salieri, who on his death day, recounts his years of rivalry with the far more talented composer, as well as Salieri admitting he might have contributed to factors that caused the premature death of Mozart who was only 35 when he died in Vienna, living in poverty, famed but scorned by high society.

Amadeus was a huge success both critically and commercially. It ran for years on Broadway and the West End in London, and the very faithful film with a script by Shaffer, won 8 Oscars in 1984. It’s an astounding play, full of verbal wit but also dramatically compelling and challenging. Mr. Shaffer’s play is a work of great literature.

It’s also a tad long winded for modern audiences, clocking in at over 2 and a half hours in running time, not unreasonable by mid to mid/late 20th century standards of a “well made” play but the current trend towards brevity in contemporary theater makes Amadeus somewhat of a long haul. Mr. Shaffer’s work is carefully plotted with gorgeous dialogue, but it does suffer a bit from some repetition. Major themes of the piece (Salieri’s eternal guilt) are hammered over and over and over again….from a pacing standpoint, it begins to feel a bit long about half way through the second of its two acts. It’s a case of “let’s get ON with it and kill off BOTH of them!”

Part of the problem could be this particular production at Seattle Public Theater. Director Shana Bestock does a fine job of moving her actors around on stage, but the pacing could be a bit more brisk. It does drag at times. But, she does deserve kudos for her interesting color blind/gender blind casting. She has women playing several of the smaller male roles (without actually changing the genders of the characters; it’s just women playing men) and the cast is very ethnically diverse. It all works beautifully and proves that smartly cast shows can be non-traditional.

The cast itself is strong. The quartet of actresses playing male roles: Heather Hawkins as Emperor Joseph and Pam Nolte, Rebecca M. Davis and Ksthy Hsieh as a trio of court officials are one of the chief delights. Their roles are primary comedic and all four actresses are delightful in these roles. Keiko Green as Constanze, the saucy wife of Mozart, is also quite compelling, nicely portraying both the sexy comedy moments as well as the more tragic scenes as Mozart falters.

As for our two leads, they both give strong performances but there IS a problem with Brandon J. Simmons as Salieri and Tim Gouran as Mozart. They’re not well cast…or, at least cast improperly in the timeline of their careers. Mr. Simmons is a bit too young for Salieri and Mr. Gouran is probably a bit too old to do Mozart. From a dramatic standpoint, Salieri needs to project that he’s older/more mature/more established than Mozart and from a purely physical/emotional range,  it’s about 10 years too soon for Mr. Simmons to play this role opposite Mr. Gouran; it’s a case of Salieri appearing younger than the Mozart!  The chemistry is off a bit and it would probably work better if either Mozart was played by an obviously much younger actor, in regard to Mr. Simmons (which would mean casting a more baby faced 20something actor) or having a late 40something Salieri against Mr. Gouran’s Mozart.

From a design standpoint, this is a strong show with a  simple but stately 18th century-esque design scheme by Richard Schaefer and some sharply edited sound design by Dustin Morache. Chelsea Cook’s witty and saucy costumes wisely decided to avoid going for the expensive pomp of trying to duplicate actual 1780s fashion but opts for a fun, sexy, “New Romantic” look that’s both fresh and modern yet respective of that era.

In short, this Amadeus is a strong production of a lovely play and it has many lovely components, but….it could use a prune. Another British play is onstage at Seattle Repertory Theatre’s Leo K. but it’s definitely more modern…it’s a taut one act that clocks in under an hour and a half. It’s rising British playwright Nick Payne’s Constellations, his time trippy/multi verse take on a relationship between a man and a woman, from their “meet cute” moment, to a break-up over infidelity, to their re-hooking up and then on to their final resolution.

Constellations explores the relationship arc between Roland, a beekeeper, and Marianne, a professor of physics at Cambridge, by a series of encounters that feature several “what if” options with each of these “if you pick this door, your life will be like THIS” moments occurring immediately after the preceding one. For instance, if Roland starts a new segment of the play by revealing, “I’m taking a dance class because…” the first time that sentence might be completed with “….my sister is getting married” but the second time it might be “….I’m getting married” and subsequently the scene will proceed briefly from that particular revelation. Typically, each “big” moment in their relationship is relived this way 5 or 6 times before moving on to the next stage in their development as a couple.

It’s a very clever conceit and Mr. Payne has written a smart play. It’s funny and heartfelt and emotionally compelling. The characters have a sense of realness to them, even when they display less than admirable attributes and though the plot does get a bit melodramatic/TV movie of the week-ish in its telling, it still manages to resonate. There are times when it does feel a bit…manipulated and “oh, look how clever we are!” and I’m not entirely sure if this play has that much depth, but as a clever bit of play writing, it certainly does succeed on those terms. While it does charm, I’m also not entirely sure if I ever need to see a production of this play again…it’s like seeing the “lady sawed in half” trick when you’re 5 years old…it’s amazing the first time but who really cares beyond that moment of original awe?

As is usually the case, Desdemona Chiang has done a lovely job of directing…she’s another one of those directors who just have the talent to organically move her actors around on a stage without it feeling phony or forced. It always just feels real, and of the moment. I always look forward to a Desdemona Chiang directed production.

She’s also blessed with two talented actors giving compelling performances. I’ve been a huge fan of Alexandra Tavares for many years, and she’s just superb here, as she channels very different options of playing the same complicated person. Max Gordon Moore is not local, but I can’t imagine any local actor who COULD play this role as effectively as he does here. He’s just terrific and I hope he comes to Seattle to do more work.

The simple set and lighting are the usual excellent work by L.B. Morse, the resident designer at the Rep. There’s a twinkly star “constellation” effect towards the end of the piece that’s emotionally delightful and meaningful.

It’s a “yes” to checking out Constellations. I don’t know if it’s necessarily a piece that will last for ages, but as a clever piece of writing and as a terrific acting exercise, it does excel.