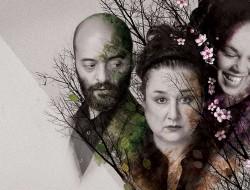 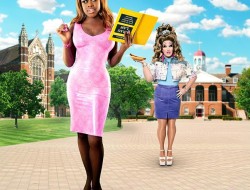 A Superb New Take On Old Work: Seattle Shakes’ All Female “Bring Down The House” Betsy Schwartz, front as King Henry VI in Seattle Shakespeare Company’s collaboration with the upstart crow theater company, BRING DOWN THE HOUSE an adaptation of Shakespeare’s Henry VI trilogy of plays with an all female cast. Photo: John Ulman

Seattle Shakespeare Company in collaboration with upstart crow collective presents an all new adaptation of Shakespeare’s Henry VI trilogy which has been whittled down to a two part extravaganza titled BRING DOWN THE HOUSE that also has the novelty of having an all female cast which is being staged in repertory at Seattle Shakes’ home base at the Center House Theater at Seattle Center until March 12th. It’s a project long in the works for the artistic team at upstart crow collective, the all female theater company that doesn’t have a huge output; this is their third production in 10 years but a major labor of love for co-founders director Rosa Joshi and actor Kate Wisniewski. The two collaborated on adapting the three plays into two parts with Part 1 being subtitled “Throne of Treachery” and Part 2, “Crusade of Chaos” and with a goal of clarifying the dense plot and cast of characters for the (mostly) true story of the real life British King, Henry VI, a story which spans several decades and a bewildering amount of British history.

It would take a thousand words or more to summarize the labyrinth plot of “Bring Down The House/Henry VI” but in a nutshell it follows the reign of that king who inherited the throne as an infant after the death of his father Henry V and relays the complicated story of “The War of the Roses” as two factions of the ruling Plantagenet Dynasty, the House of Lancaster (Henry’s branch) and the House of York vie for control of the throne. Part I (Throne of Treachery) focuses on Henry’s marriage to the conniving Margaret of Anjou and the machinations of rival factions including Richard of York, to seize power from the weak willed Henry and his long time protector Humphrey. Part 2 (Crusade of Chaos) picks up after the death of Humphrey and many others, and follows through with the rise of the House of York including the sons of Richard of York two of whom succeed Henry as Edward IV and the dastardly Richard III, who of course gets his OWN Shakespearean play down the road.

Yeah, it’s a pretty confusing story and that can be a major hindrance for audiences. But, Rosa Joshi and Kate Wisniewski’s very clever adaptation cuts away much of the non-essential and keeps this story firmly on track. It’s a crisply clever clever script that maintains dramatic momentum while embodying its characters with dimension and depth. And, the smartness of those words is only enhanced by Ms Joshi’s innovative, superbly staged direction; she does such a great job of clarifying the story with simple, precise choreography that makes it all so easy for the audience to follow and enjoy the complex story.

This really is one of the best directed plays I’ve ever witnessed in Seattle. EVERY movement seems to be very well thought out while remaining organic and true to the story and the needs of the character’s motivations. Unlike many classic works, both sections of “Bring Down The House” just zip by…there’s none of that dreaded usual boring slump you find in most Shakespearean productions. And, it’s obvious that the support Ms Joshi received from her Movement Director, acclaimed choreographer Alice Gosti and her fight choreographer, Peter Dylan O’Conner was also a huge contribution to the overall flow and movement of these productions.

Yet another huge asset was the live score composed and adapted by William Satake Blauvelt and the use of Japanese Taiko drums as part of the music and sound composition with several key dramatic moments incorporating the cast playing the drums as instructed by Lika Seigel. Along with Robertson Witmer’s usual excellent sound design, this production sounds as amazing as it looks. But, it looks great too with on point costume work by Christine Tschirgi that utilizes mostly blacks and greys for the base of all the costumes with very subtle use of any other color. Geoff Korf’s evocative light design and Shawn Ketchum Johnson’s strong scenic design also being stand outs in a production full of them.

I know many people have “issues” with Shakespeare…either they’re just not into the language or they’ve been burned by too many bland, awkward productions but Seattle Shakes/upstart crow’s BRING DOWN THE HOUSE is a mega watt must experience theatrical event. It’s a taut, superbly executed drama that makes for an invigorating night (or two) of theater. Very Highly Recommended.

(And, a note to Seattle Shakes: MORE collaborations with upstart crow, please!)