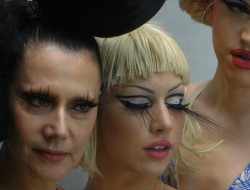 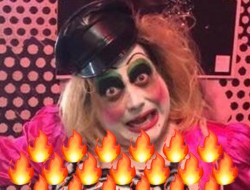 Review: “Cherdonna’s Doll’s House” Is Sublime…Until She Leaves The Stage It’s happened before. A play or musical starts and it just seems…on point. The acting is sharp and the direction is assured and it all looks good and there’s great energy in the theater and then…it lurches the wrong way and things start to go south.  Frequently this happens fairly early on in a show. If there are issues with the actual script, or an actor, or the direction they usually became apparent by the 15 or 20 minute mark. In fact, that happened earlier this year at Washington Ensemble Theatre’s Every Five Minutes, its quirky and odd dystopic paranoid thriller that did just that…opened strongly then went into the crapper about 20 minutes in.

Annoyingly, it’s now happened again with their just opened production of CHERDONNA’S DOLL’S HOUSE their oddball deconstruction of the classic play by Henrik Ibsen at the hands of performance artist Cherdonna Shinatra aka Jody Kuehner. Except in this case, “Cherdonna’s Doll’s House” (to be abbreviated as “CDH” from here on) makes it almost to the 2/3 mark of its 90 minute running before the wheels fall off the doll’s carriage. In fact, the first hour of “CDH” is borderline brilliant; clever theater making at its finest and I was almost giddy with excitement at the pleasures it had to offer. I liked everything about it…the sheer joyous audacity of the Cherdonna character running amuck during a production of her “favorite play”.

And, that’s the simplistic  synopsis of what “Cherdonna’s Doll’s House” starts out being. It opens with Cherdonna casually entering the set, the late 19th century Norwegian living room of Torvald and Nora, and explaining just that to us…she really loves this play! And, then the play starts and Cherdonna stays to interact with the characters and the plot with frequently hilarious and ludicrous results as she climbs over furniture and actors and stopping the proceedings once in awhile to explain things to the audience…like the concept of “banking”, complete with a flow chart. The actors in the play are in on the “gimmick” as well as they break character to interact with Cherdonna and while some of them seem to like this deconstruction, others are more hostile to it.

Now, for some people this is sheer perfection…a clever theater artist commenting on another piece of art and adapting it to form a new  creation. It’s all rather obvious to one degree or the other; after all it IS called “Cherdonna’s Doll’s House” and that’s just what it is…the character of Cherdonna “playing” with the characters of the famous play by Henrik Ibsen and treating it all as her own private “doll’s house” complete with showers of cookies and breaks to indulge in those cookies with a big glass of milk. It’s “Pee Wee’s Playhouse” but on a literary level. It’s a bit basic but it’s all delicious fun…if you like deconstructions of famous old plays performed by kooky, dance-centric, bio-drag queens with quirky senses of humor. Some people were really loving the first hour of “CDH” the night I saw it and…some people looked pained. One couple left at the hour long mark. It’s not for everyone.

But, after that first hour of delightful mayhem, all the joy got sucked out of the room and suddenly “CDH” wasn’t really for anyone…well, maybe masochists. At the hour long mark we get a rather audaciously brilliant music video moment featuring the entire cast with Cherdonna (naturally) taking the lead lip syncing role to a Cher song (I won’t spoil it) and it’s just delightful chaos and in my head I was composing raptures to the brilliance of the creators of this masterpiece and then…it started to fall apart. The fantasy collapsed as heavy handed concepts and awkward directorial choices elbowed their way into the proceedings. Cracks started appearing in the plaster. And, it progressively got more and more dour as more and more horrid choices were made including the final fatal straw…Cherdonna vacates the main action of the play.

The last half hour reverts to ham handed Ibsen and then it all wraps up with trying REALLY hard to make an analogy between the actual bold feminist ending of Ibsen’s A Doll’s House with the WET version of A Doll’s House and it feels labored and lazy and annoyingly contrived. Like they couldn’t think up a better, more clever way to wrap it all up so they decided to go with the depressing version because real art is about pulling the rug out from under your audience’s feet!!!!

WET has been guilty of this before, as stated earlier. They frequently try too hard to be “arty” and controversial by being deliberately contrarian and off putting. Art should be difficult and tough and challenging but resorting to childish stunts in the name of “real art” has been a cliche for over a century. Controversial challenging art happens because of content, not because of style. Whenever WET tries this approach, it usually fails with examples being 2015’s “Sprawl” and 2012’s “The Callers” which the director/co-creator of “Cherdonna’s Doll’s House, Ali Mohamed el-Gasseir also directed and/or created. There are familiar directorial signatures from Mr. el-Gasseir all over this production…annoying repetitions and stupidly long pauses. The first hour of “CDH” feels very Cherdonna-y but the horrible last third feels very much the work of Mr. el-Gasseir. Unfortunately.

So. It boils down to loving the first hour of “Cherdonna’s Doll’s House”. The actors are good in it…the designs are excellent (Pete Rush’s homey Norwegian villa set; Michael Notestine’s period costumes for the cast and Danial Hellman’s outrageous lime green body suit for Cherdonna) and it’s all held together by the brilliance of Jody Kuehner’s Cherdonna character. The first hour is a treat of the highest order…a delightfully effervescent fruit punch but one packed with vitamin enriched sustenance!

The last half hour is a turd floating in that punch bowl.