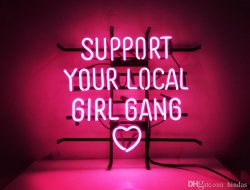 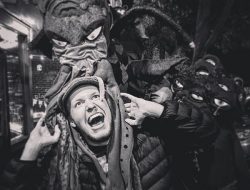 Gender dynamics in everyday conversation between complete strangers frequently result in the usual sexist role playing where men feel the need to talk over, through and around women.

As a male of the species, I try to avoid falling into that trap. And, I know I sometimes fail. It can be hard for those of us (regardless of gender) who tend to enjoy hearing ourselves expound on subjects we’re passionate about. Men do it mostly though knowledgeable women are also certainly capable of “monologuing” on a topic near and dear to their hearts…it’s part of human nature. Flappin’ the mouth.

But, men ARE certainly far more likely to engage it than women…in my opinion. And, it happens in the oddest of places…like in press junkets for indie comedy movies starring very funny women.

So, to steal a bit from another funny woman, we’ll frame this story in a way familiar to anyone who loves watching Sophia Petrillo in “The Golden Girls” tell a beloved story from her past…

“Picture it”: a meeting room in an upscale First Avenue hotel in Seattle during the first week of June. It’s the Seattle International Film Festival and filmmakers from around the globe have jetted in to promote their films screening in the festival. Most are unknown artists but SIFF does grab a starry name or two every year…including Aubrey Plaza, the funny actress best known for starring in “Parks & Recreation” from 2009 to 2015 as the drollishly deadpan April. She’s at SIFF 2017 to promote her latest film THE LITTLE HOURS the filthy medieval comedy about horny nuns behaving poorly in the Tuscan countryside circa 1380 or so. The film, which stars Plaza as one of those foul mouthed nuns along with Kate Micucci and Alison Brie as her fellow sisters plus Dave Franco as the hunky peasant they pursue, got a great reception at this year’s Sundance Film Festival and was playing SIFF prior to opening in select cities on June 30th and expanding further on July 7th including screenings at SIFF’s Uptown Cinema, where it is still playing.

Ms Plaza was in attendance in this sleek meeting room at this equally sleek bourgie hotel with the director/writer of “The Little Hours”, Jeff Baena who is also her…boyfriend? Partner? Regardless of the correct wording of their relationship and despite the fact Aubrey Plaza is a co-producer and star of the film, Mr. Baena did most of the talking at this mini-press junket which included four writers…myself, a young woman from an outlet I failed to write down and two other male bloggers from nerdy film websites that I hadn’t heard of. So, in a nutshell, it broke down to being a room with 2 women in it and 4 men.

And, naturally, the men did most of the ‘splainin’.

Which, in a way, was sorta/kinda ironic since “The Little Hours” is an empowering film for female comedic actors. It’s been much compared to the ribald films of the Seventies created by Mel Brooks and the Monty Python troupe with lots of potty talk and raunchy sexual situations. But unlike those films which tended to either only feature women in subordinate roles (Brooks with the very funny Madeline Kahn and Cloris Leachman; Python who played ALL the roles in their films including 99% of the female ones), “The Little Hours” centers on the three nuns (plus Molly Shannon as their superior) and relegates the men to support…including using Dave Franco as the “sex object”. The film is primarily a showcase for female talents and proof that women are equally capable of playing “down & dirty” comedy just like the boys do. Which is a great thing. It’s a fun, filthy film propelled by female energy and talent.

But interview situations are odd and very much depend on the personalities and energies of both the interviewees and the interviewers. And, while the film had great female energy, this interview with Aubrey Plaza did not…she seemed bored, tired, ill at ease and mostly annoyed to be there. It didn’t help that her partner/director Mr. Baena frequently talked over her and answered most of the questions, even the ones directed TOWARDS Aubrey Plaza. It’s typical of directors to want to control situations but the fact he was answering FOR her in a multiple simultaneous roles as her boyfriend/director/co-producer/writer of the film was a tad…uncomfortable. It also didn’t help that the two other male writers tended to ask clunky geeky questions…including a weirdly awkward non-question/comment about a scene in the film where Aubrey Plaza is dancing naked around a bonfire in the woods. The nerdish and slightly leering way the question was posed visibly irritated Plaza who snapped, “Is that even a question? What kind of question is that? Do I like dancing naked in the woods?”

Plaza was also snappishly funny when she responded to a question about her deadpan comedy style:

I don’t really look at any potential project as a ‘Oh, here’s a chance to really get my “deadpan” going on’ opportunity….

(For those of you unaware, The Decameron is a 14th century Italian collection of stories, most of which are raunchy and ribald and concern various ways to be sinful. I’m not sure how you DON’T set out to make a raunchy film comedy when your subject matter is foul mouthed nuns trying to fornicate with the new stud in their vicinity. It’s not exactly material fit for an episode of “Little House on the Prairie”…)

It felt like a long 20 minutes in that room. The two nerd boys asked dumb fan boyish questions for the most part; the female interviewer struggled to be heard and got talked over; Plaza was low energy and disengaged; Baena was pretentious and pedantic in that special way that certain filmmakers can be.

Questions tended to be along the lines of:

Q: “What was it like to film in Tuscany?”

A: “It was fun to shoot in Tuscany. It’s very beautiful.”

Q: “What was challenging about making this film?”

A: “The donkey was a challenge at times but sometimes steals the show. Her name was Vittoria.”

Really, the best moment was when Baena remarked that Aubrey was good for the role of a renegade nun because “she has witchy elements” and she then gave him a “Look”.

In a nutshell what we learned about this film/junket experience:

Check out THE LITTLE HOURS at SIFF Cinema at The Uptown.