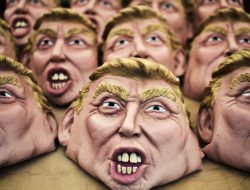 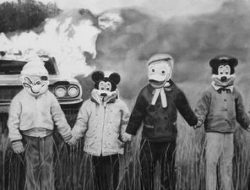 Why Are Clowns Scary? Why Are We Paranoid About... Since Halloween is on a Tuesday this year, it’s an exceptionally long weekend of spooky frivolity with dozens of holiday events happening from tonight (Friday, October 27th) through the actual day itself (Tuesday, October 31). Obviously there are many events geared to the public at large…various haunted houses and community events but we’re going to focus on the queerer ones….

The big event for Friday is Nark Magazine’s INTO? 2 happening at Neumos. It’s a dirty, fun costume, vogue party:

Into? is a combination drag pageant, freak show, runway walk-off and look-fest in a perverted Pacific Northwest fashion, an uncensored spectacle of cosmic proportions and gag-worthy abomination of heathens setting the elongated stage and runway ablaze with high-art drag and costumery, dance battles and walk-offs. It’s up to the crowd and the judges to pick which battle contestant walks home with the $1,000 prize, and it’s up to each contestant to give you a show like you’ve never seen before, strutting the runway to the twirling orchestrations of legendary ball DJ MikeQ.

There’s also RUCKUS throwing a Halloween Gear Party at The Seattle Eagle…Neighbours has Roxy Doll hosting SEASON OF THE WITCH, yet another costume contest event…Seattle’s Queer Latinx community has a big INFIERNO Fiesta happening at Montis Grill on Beacon Hill.

Pony has their UN-MASC weekend of events on Friday AND Saturday…check out the poo, which includes the one and only JACKIE HELL performing live Friday night:

For Families/Kids, Capitol Hill Chamber of Commerce is putting on their annual HILLOWEEN event on Saturday afternoon.

This event is FREE and open to all. RSVP/Tickets are optional. For Grown Ups, the big events are:

WerQ Halloween at Julia’s on Broadway with special guest star, Jinkx Monsoon’s arch nemesis, the one and only ROXXXY ANDREWS!

All the usual suspects have Halloween contests/parties including RPlace and The Cuff with their Wicked Woods Party and Neighbours has more “Season of the Witch” with Roxy Doll and Gaysha Starr. Kremwerk has KREWPOCALYPSE….Check out all 12,345 options on the SGS Calendar!!! There’s also PURR’s very popular MONSTER’S BALL, their huge annual costume party and this year, they get to break in their new home in Seattle’s Montlake neighborhood for their spooky hq. Judging begins at midnight for the costume contest with grand prize at $1000!

But, don’t scare the neighbors, too much!

The Queen of Seattle Party Promoters, Verotica has her big Spooky Sex Fest down in the Pioneer Square hood and it’s sold out online so you’ll need to creep down there EARLY to snag the few remaining door tickets left for: “Masc4Masquerade with Alex Acosta”

We may or may not be referring to Verotica’s Grindr profile but either way, your favorite party girl is throwing Seattle’s hottest Halloween party!

Join us on Saturday, October 28th from 10 PM to 4 AM for Masc4Masquerade! Direct from San Francisco is a legend in the game itself, DJ ALEX ACOSTA!

Located in Pioneer Square, Merchants Café and Saloon is one of Seattle’s oldest bars with a history of being visited by ghosts. Almost as frightening as Verotica before she tucks…

Keeping beats served LATE in the night, this is the Halloween event not to miss, boys. Mask up with some of the hottest bodies & faces, we can’t wait to bring you what is sure to be on an unforgettable night.

See you hotties on the dancefloor!! One of the newest Seattle venues, QUEER BAR has a Halloween line-up in store for their entire weekend…check out ALL their events:

MX. a QUEER drag show hosted by Robbie Turner of RPDR and DJ set by JUSTA/ 10pm to 2am.  $10 cover.  All door proceeds are paid to entertainment!

Nightmare on Queer Street :  A very special Halloween version of MX. a Queer drag show starring Robbie Turner of RPDR at 9pm.  Following will be a costume contest and dance party with $1,500, $700 and $500 dollar prizes for first, second and third place winners.  DJ Nitty Gritty will be on the decks from 10pm to close. Registration for the costume contest starts at 10:30pm.  Let’s get sickening!  $10 cover.  All door proceeds are paid to entertainment! The season premieres at 12am on Halloween!  Make sure to join us on Monday night / Tuesday morning for the debut!  Free.

All encompassing trivia, always with a queer round!  Great prizes, stiff drinks!  This week we are focusing on all things scary… be prepared.  Dance party to follow…

We’ll return tomorrow with the best events for Sunday/Monday/Tuesday! OR, go check them out on the SGS Calendar NOW!!!