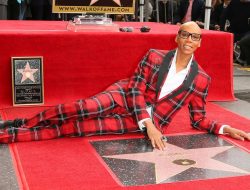 In Big Drag News: RuPaul Gets A Star; Trixie... 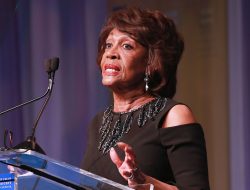 Maxine Waters and Adam Rippon Give Powerful Speeches At... Sitting near her at a recent talkback for the play Hir, which she directed as a co-production of ArtsWest Playhouse and Intiman Theatre (running through 3/25), I saw her on the edge of the seat and could tell she had had enough.

But first, a brief synopsis of the plot via ArtsWest’s website:

Somewhere in the suburbs, Isaac has returned from the wars to help take care of his disabled father Arnie, only to enter a different war zone: a household in revolt. His mother, Paige, liberated from an abusive marriage – with Isaac’s newly out transgender sibling, Max as her ally – is on a crusade to dismantle the patriarchy. But in Taylor Mac’s sly, subversive comedy HIR, annihilating the past doesn’t always free you from it.

Responding to a sequence of audience members who equated Paige’s year of “abuse” of her husband Arnie with his decades of violence against his wife and family, Zeyl pointed out their analysis equated Paige zapping him with a water spray bottle and embarrassing him with ugly feminine clothes and makeup, with his breaking the fingers of his wife and children, causing three emergency room trips, and beating the dog with a bat. Oh, and raping her in order to demonstrate his masculinity after losing his job — after which she just shrugged, the offense she credits with causing her husband’s stroke in the first place.

Zeyl has spent a great deal of time with the play. Acquainted with playwright Taylor Mac, she was made aware of the script years ago and wanted to bring it to Seattle. After some searching, she found which theater had the rights tied up and, eventually, convinced them to let them go, after it was clear they wouldn’t be mounting the production. ArtsWest slated the show in its 2017-2018 season, as a co-production with Intiman (the first joint venture of the two theater companies), of which Zeyl was named Artistic Director at the end of 2017. Zeyl, multi-talented in scenic and direction roles as well as her new artistic leadership position, was a natural choice to direct the play.

The talkback (this past Friday 3/16) was the third in a series of four, each of which devoted attention to one of the four characters and issues presented in their roles. That night was all Paige: Gretchen Krich, who plays a (pardon the French and send the kids away) fucking phenomenal Paige, spoke of her experience with and interpretation of the character, and longtime Seattle Police Department detective Kim Bogucki spoke of her experience with domestic violence responses out in the non-theatrical world.

To indulge a bit of a side note: Bogucki is also the founder of The IF Project, www.theifproject.com, an organization that works with incarcerated people and asks them to imagine if one person or event had changed the courses of their life. (Learn plenty more about The IF Project with their excellent documentary, screening Sunday, 3/25 at 1 pm at SIFF Egyptian — coincidentally, the same day Hir closes. Embracing Bogucki after the talkback, I noted, “I usually don’t like cops, but you’re OK.” She was OK with that, and I wonder how often she hears exactly that sentiment.) Zeyl, Hir’s director, made it clear in responding to the talkback audience members that it was Paige’s night in the series. But she also pointed out a troubling truth: audiences had become oh-so-accustomed to male displays of dominance and violence that it was Paige’s acts of controlling and belittling — not Arnie’s brutal history of actual violence — that stood out to viewers. And, Zeyl noted, that perception was long overdue for change.

The talkback mimicked the problems of all too many talkbacks in Seattle: people want to hear themselves talk; viewers don’t understand the core of the play but want to impart their values all over it; people want to make a piece all about them — invoking the descriptor “universal” when virtually any listening mind can see it’s anything but. (The most common use of “universal” in talkbacks is, incidentally, from white audiences watching black actors onstage in a black story by a black playwright. Fellow white folks: We need to get more comfortable witnessing, enjoying, reveling in, excellent art that is not about us.)

Mac’s play is extreme, by design; but for those of us who have experienced personally a hyper-controlling mom while going through gender transition and dropping out of high school, who have had to piece together that mom’s control-doling with her abuse-surviving, and must later decide for ourselves how to exist with the abuser when he becomes the invalid — for us, this play is a salve. For as the (fictional) Hir household rages on, as the hot fucking mess that it is, it gives comfort that maybe, just maybe, at least our (real) lives are a touch normal over theirs.

Hir runs through 3/25 at ArtsWest in West Seattle and, if at all possible, don’t miss it. (Tickets HERE!) The final talkback, covering PTSD and military deployment issues, is on Friday 3/23. (Note that Charles Leggett, who plays Arnie, will be replaced by an understudy for all dates after 3/18. Leggett, the ever-flexible stalwart of Seattle stage, is headed to Portland to tackle Shakespeare after Mac.) From left to right, Evan Barrett, Charles Leggett (in corner) and Gretchen Krich in Taylor Mac’s HIR at ArtsWest, a co-production with Intiman Theatre