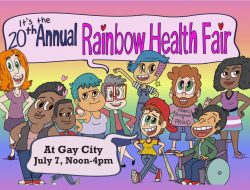 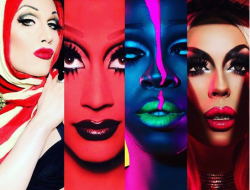 Seattle’s THIRD most successful drag queen* and the #1 diva who HASN’T been on a certain show, is back in Seattle for the summer. Yes, MAMA TITS has stomped her way back into town to perform at her drag brunch, Mimosas Cabaret at the Unicorn/Narwhal on Sundays but she’s also staging the hit show she performed all winter/spring in Puerto Vallarta Mexico. It’s happening at The Triple Door, on Thursday, July 12th at 8pm and it’s the final wrap up for  BIG & LOUD, her all singing cabaret show music directed by Seattle’s own Nathan Young who will accompany her on these final gigs…Mama and Nathan are also heading to San Francisco to perform the show at Oasis on Sunday, July 15th (get tix to THAT show, over here if you’re in the Bay Area!)

Go HERE to snag those tickets for The Triple Door on Thursday…it’s Seattle’s final chance to see this hit show. Mama and Nathan are already hard at work for their NEXT show…Mama returns to Puerto Vallarta in fall of 2018 for another season of music and comedy.

*Even though Ms Monsoon seems to have flown the coop (moved to San Francisco for unfathomable reasons) she’d still have to be ranked Seattle’s #1 most successful queen based on the fact she WON her season of RPDR…then BenDeLaCreme obviously….then Mama T.

Sadly, Robbie careened her career down a dead Uber driven cliff this last spring and is out of the running.

Then it would be….James Majesty? They get gigs out of town due to being on Dragula.

Everyone is else is getting by on tips, drink tickets, Peaches Christ visits, bingo and “hopes & prayers”. (I keed) (Mostly)

More on the Triple Door show: You can now purchase Private Box Suites online! These are glassed in rooms overlooking the theatre, perfect for larger groups or special occasions.

Seattle’s own superstar, drag diva Mama Tits, returns triumphantly to The Triple Door! Her all new drag show, “BIG & LOUD,” is guaranteed to take you on a wild journey about living your truth and getting through life with laughter and sex! This show is complete with incredible live music, live singing, hilarious stories, and side-splitting comedy!

Nathan Young
Alongside Mama Tits is the incomparable Nathan Young. He is a music director, arranger, composer and vocal coach. He studied vocal pedagogy and orchestration. He is passionate about conducting and accompanying. Most recently he music directed the highly touted Seattle production of Parade. He is especially passionate about creating unique and powerful textures from musical theatre vocal ensembles. He teaches musical theatre ensemble and private voice at Village Theatre and for Cornish College. Nathan is a collaborator on several new works as the music supervisor. He is currently composing the scores to several musicals with his collaborator Leslie Wisdom. Nathan loves the energy of cabaret – the art of creating something new each time with an individual artist. He music directs and produces cabarets here in Seattle and San Francisco. He has specializes in cabaret music arrangement for drag.